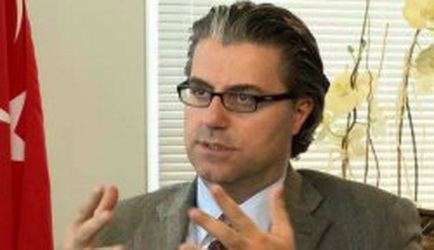 Tehran, Oct 25, IRNA – Iran-Turkey relations will not be affected by the outcome of elections, Turkish Ambassador to Iran Reza Hakan Tekin said on Sunday.

He made the remarks after casting his vote in the parliamentary elections held in Turkish embassy in Tehran.

Iran and Turkey enjoy traditional friendly relations and any party or coalition of parties that wins the parliamentary elections will give a top priority to boost ties with Tehran, Tekin said.

He underlined that because of elections and some internal problems, visits to Iran by Turkish officials have decreased, but they will increase after establishment of the new government.

Turkish citizens living in Iran cast their votes for the upcoming Turkish general elections at Turkish embassy in Tehran on Sunday.

Turkish citizens, including the Turkish nationals in Iran, started to vote on Sunday at polling stations across Iran in Turkey’s general elections, with voting in Turkey itself set to take place on November 1.

Starting from October 8, Turks living in many parts of Iran are already able to vote in the parliamentary elections.

Voting started at 10 a.m. on Sunday. Before those eligible to vote can enter polling stations, they have to go through security checks and are also subject to a check as to whether they are on the country’s Overseas Register Roll. Turkish citizens living overseas who are not registered beforehand will not be allowed to vote.

Turkish ambassador to Iran told reporters on Sunday that voting for Turks residing abroad began on October 8 and Turks living in Iran have time to cast their votes till Sunday 9:00 pm.

Turks in Iran can vote also in Turkey’s consular generals in Tabriz and Orumiyeh.

The turnout among eligible voters living abroad was 30 percent and 819 thousand Turks have already cast their votes out of 2.3 million Turks living abroad.

He said there are 1,029 eligible Turkish voters in Iran of whom 829 are living in capital, Tehran.

22 percent of those eligible to vote in Iran cast their votes in the June 7 parliamentary election, the envoy added.

He said that security of this round of parliamentary election has been guaranteed.