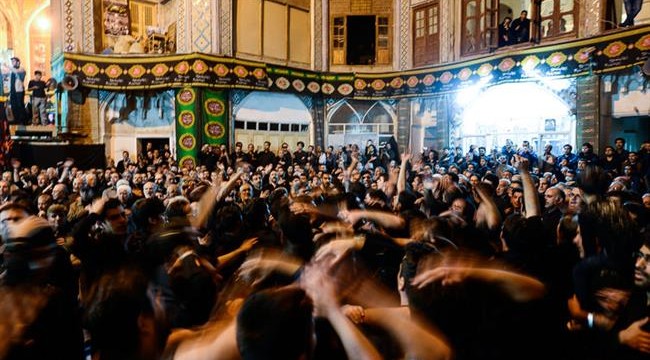 Karbala (Iraq) (AFP) – Huge crowds of black-clad Shia faithful massed in the Iraqi city of Karbala Saturday, crying and beating their chests to commemorate the prophet’s grandson, who died in the seventh century.

The holy day of Ashura was marred by attacks in Pakistan and Bangladesh but got under way without incident in southern Iraq, where last year’s security fears have given way to political grievances.

Gathered under the golden dome of Imam Hussein’s mausoleum in Karbala, devotees clutching paper tissues wailed and wiped their tears as they listened to accounts of Hussein’s death.

The dirge cantor himself repeatedly choked back tears as he sang the praise of Hussein, whose 680 AD killing by the armies of Caliph Yazid lies at the heart of the Sunni-Shia schism.

Many Shia worshippers travel from neighbouring Iran and other countries each year to visit the shrine, which lies about 80 kilometres (50 miles) southwest of Baghdad.

Millions of others across the Shia world, from Lebanon to south Asia, hold processions in their home towns, performing a variety of rituals, many involving flagellation.

Some beat their backs to a drumbeat using chains or blades. Others beat their heads with a sword until their faces and their white mourning robes are covered in blood.

The 10th day of the mourning month of Muharram has been marred by attacks in the past and Iraq deployed tens of thousands of security forces across the country.

“Our forces have set up a security plan that includes more than 20,000 members of the security forces,” Qais Khalaf Rahima, a senior army commander, told a news conference in Karbala on Friday.

They formed three concentric security rings around Karbala, banned traffic in the city centre three days ago and used special explosives detection equipment, he and the Karbala police chief explained.

An Iraqi Shia actor performs in Najaf on October 24, 2015 during the reenactment of the Battle of Karbala (AFP Photo/Haidar Hamdani)

The measures are aimed at reducing the risk of suicide bomb attacks by the Islamic State, an extremist Sunni group which controls parts of Iraq and considers Shias heretics.

Karbala province borders the vast Anbar region, which is an IS stronghold.

Baghdad’s early efforts in the counter-offensive that followed the devastating jihadist assault launched across Iraq in June 2014 focused on securing Karbala and the other holy Shia city of Najaf, further south.

Military operations against IS south of Baghdad were successful and the commemorations in Karbala, as well as the various processions in Baghdad and southern Iraq, felt less exposed than last year’s.

In Pakistan, Ashura was marred by a suspected suicide blast which targeted Shias in the southern city of Jacobabad and killed at least 24, according to a provincial minister.

Afghan Shia Muslim devotees beat themselves with chains and blades during Ashura commemorations in front of the Abul Fazl Shrine in Kabul on October 24,2015 (AFP Photo/Wakil Kohsar)

At least one person was also killed and nearly 80 wounded in a bomb attack on the main Shia shrine in Bangladesh’s capital Dhaka Saturday, police said.

The commemoration, the saddest day in the Shia calendar, had political undertones in Iraq, where many of the faithful vented their resentment towards the country’s leadership.

“Remembering Imam Hussein gives us the strength to fight corruption and those who are responsible for it in government,” said Kadhem Hussein.

The 52-year-old, who comes from his southern hometown of Basra every year for Ashura, wore a black shirt and stood in the middle of a huge crowd following the dirge on screens outside the shrine.

The past few months have been marked by mounting popular discontent over the lack of services and corruption.

Prime Minister Haider al-Abadi has announced a reform package but the measures are slow to take effect and weekly protests in Baghdad and elsewhere have continued.

“Our politicians try to cast themselves as close to Imam Hussein but who stole the state’s money?”, said Jassem Mohammed, a 40-year-old man from Najaf.