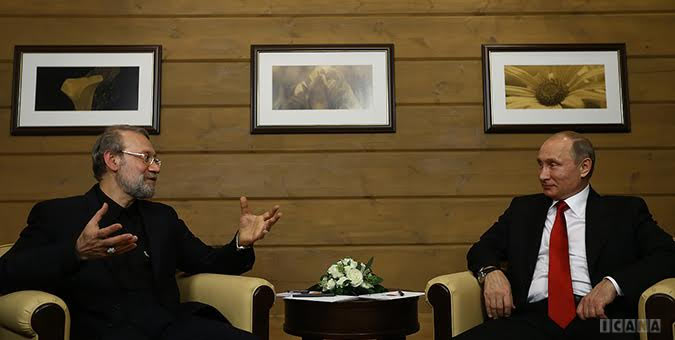 Iran’s Parliament (Majlis) speaker has praised Moscow’s positive role during the nuclear talks with six world powers that culminated in an agreement over Tehran’s nuclear energy program, expressing hope that bilateral ties between the two countries would further develop.

In a Thursday meeting with Russian President Vladimir Putin, Ali Larijani thanked the Russia leader’s constructive role in the course negotiations over Iran’s nuclear case, saying Moscow-Tehran ties would definitely flourish under the new circumstances created by the breakthrough in the nuclear discussions.

The meeting took place on the sidelines of the 12th annual Valdai International Discussion Club meeting in the Russian resort town of Sochi.

Iranian negotiators and representatives from the P5+1 group – Russia, China, France, Britain, the US and Germany – succeeded in finalizing the text of the Joint Comprehensive Plan of Action (JCPOA) in the Austrian capital, Vienna, on July 14.

Elsewhere, Larijani pointed to Moscow’s stance on regional issues, saying, “We (Iran) consider Russia’s role and its efforts to establish regional peace and stability as effective and useful.”

Putin, for his part, stated that the Iranian nuclear case came to a conclusion through logic and negotiations, adding that relations between Russia and Iran are developing.

The Russian head of state also highlighted Iran’s constructive role in the fight against terrorism, particularly in Syria.

Without Iran’s engagement and participation in initiatives aimed at the resolution of the Syrian crisis, all such efforts will be in vain, the Russian president added.

On Thursday, Russian Foreign Minister Sergei Lavrov highlighted Iran’s role in resolving the ongoing conflict in Syria, saying that the settlement of the crisis gripping the Arab country has “no prospect” without the Islamic Republic’s participation.

Two conferences were previously held in an attempt to resolve the Syrian crisis in the Swiss city of Geneva, one in 2012 and the other in 2014. However, both events ended in failure amid the absence of Iran, an important regional player.

Tehran has drawn up a four-point peace plan on the Syrian crisis, which calls for a national unity government, a ceasefire, fighting terrorism and constitutional reforms in the violence-torn Arab nation, according to Iranian Foreign Minister Mohammad Javad Zarif.

The foreign-sponsored conflict in Syria, which flared in March 2011, has claimed the lives of more than 250,000 people and left over one million injured, according to the United Nations.