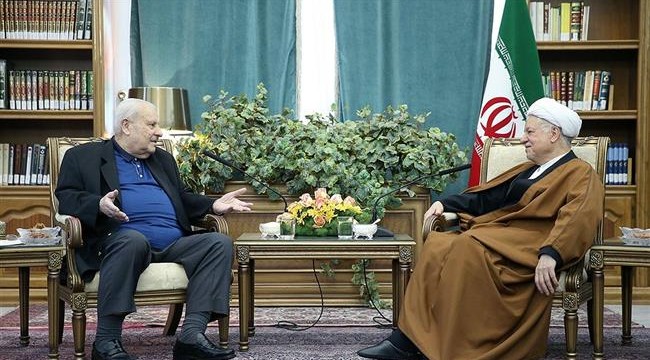 “The issue of Palestine, as the most important matter in the Islamic world, should not slip into oblivion amid political rifts and hue and cry because it is the wish of the Zionists to take advantage of Muslims’ forgetting [the issue] to broaden the extent of their crimes,” the chairman of Iran’s Expediency Council said.

Ayatollah Rafsanjani made the remarks in a Tuesday meeting with Palestinian Ambassador to Tehran Salah al-Zawawi.

He said that rulers of certain Islamic countries have forgotten the Palestinian issue to such an extent that Israel is no longer considered a “dangerous phenomenon” in the Middle East region.

Describing the Palestinian nation as the most oppressed people in the world, the high-ranking Iranian official said all Palestinians, whether those who are living in their homeland or those who have taken refuge in other countries against their will, are struggling for their cause.

The Palestinian envoy, for his part, said the Israeli regime backed by the United States is pursuing a new plot for Palestinians.

The occupied Palestinian territories have been the scene of a fresh wave of clashes between Palestinians and the Israelis. The clashes were triggered by the Israeli regime’s imposition of restrictions on the entry of Palestinian worshipers into the al-Aqsa Mosque on August 26.

The fresh violence comes as UN Secretary General Ban Ki-moon on Tuesday made an unannounced visit to al-Quds in a bid to calm the rising tensions in the occupied territories.

Israeli troops and armed settlers have killed some 51 Palestinians while eight Israelis have also been killed in fresh clashes.