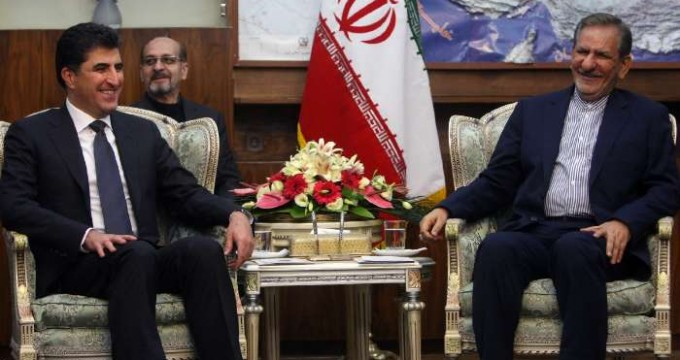 “We expect the Iraqi Kurdistan region’s officials to pay more serious attention to confront the terrorist groups’ aggression and the armed activities against Iran that are occasionally conducted from inside the (Kurdish) borders,” Eshaq Jahangiri said on Monday.

He made the comments in a meeting with Prime Minister of Iraqi Kurdistan Region Nechirvan Idris Barzani, in Tehran.
Jahangiri further reaffirmed Iran’s full support for stronger ties between Iraqi central government and the Iraqi Kurdistan semi-autonomous region, saying Iran always favors solidarity among different Iraqi ethnic and religious groups.
The Kurdish premier, for his part, praised Ian for siding with the Iraqi nation and government in hard times.
He also highlighted the ample opportunities for the expansion of trade ties between Tehran and Erbil, hailing the semi-autonomous region’s relations with Iran as “strategic and historic.”
Nechirvan Barzani has traveled to Iran to attend a core group meeting of the Munich Security Conference (MSC), held in Tehran.