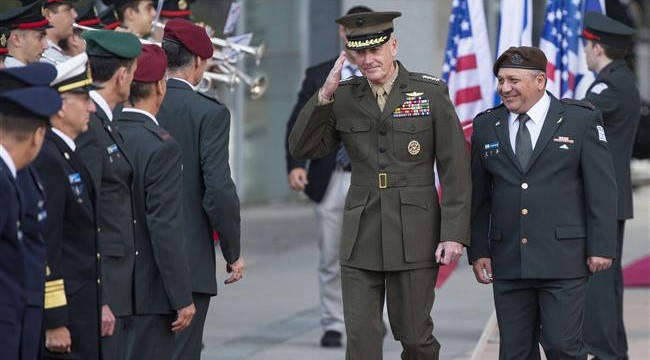 The US military chief has pledged more cooperation with Israel amid Tel Aviv’s brutal crackdown against Palestinians in the occupied West Bank and the besieged Gaza Strip.

Chairman of the Joint Chiefs of Staff General Joseph Dunford made the pledge in meetings with Israeli officials including Prime Minister Benjamin Netanyahu, US media reports said without giving further details.

Dunford, who just recently took over as chairman, said he made Israel his first stop to reflect the importance of the relationship between Washington and Tel Aviv.

During his two-day stay, Dunford briefly discussed an annual military aid package worth three billion dollars for Israel which is due to expire in 2017.

The two sides had been looking for a 10-year aid package, but talks were earlier stalled by Netanyahu in protest at Iran’s nuclear agreement with the P5+1 countries, Britain, China, France, Russia and the United States plus Germany, in July.

Before Netanyahu suspended the military negotiations, the two sides were about to agree on a new package of grants worth $3.6 billion to $3.7 billion a year, according to US and Israeli officials.

Israeli Ambassador to Washington Ron Dermer said on Sunday that the “discussions over a new Memorandum of Understanding between Israel and the United States, which had been on hold for some time, resumed this past week in Washington.”

The current agreement between Israel and the US went into effect in 2009 and will expire in 2017.

Tel Aviv spends most of the aid it receives from the US to buy American military hardware, such as jets and components for missile systems.

The new talks come as the US chairman of the Joint Chiefs of Staff, Marine Corps General Joseph F. Dunford Jr, arrived in Israel on Saturday.

The latest pledge comes as amid rising Israeli violence against Palestinians in the occupied Palestinian territories.

Tensions flared after Israeli regime’s imposition in August of restrictions on the entry of Palestinian worshipers into the al-Aqsa Mosque. Dozens of Palestinians have been killed in clashes with Israeli forces and settlers across the occupied territories since the beginning of October, reports say.