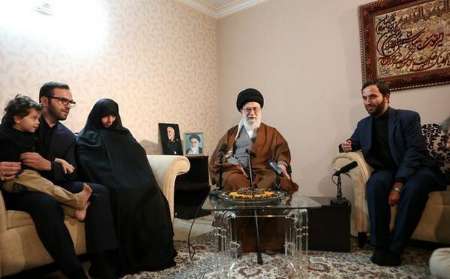 Tehran, Oct 18, IRNA – Leader of the Islamic Revolution Ayatollah Seyyed Ali Khamenei met the family of the IRGC war veteran Brigadier General Hossein Hamadani who was martyred in Syria at their place of residence.

Ayatollah Khamenei lauded the slain general for his achievements in the fight against the Takfiri terrorists.

General Hamadani was killed in Northern Syria on October 8, while providing military counseling services to the Syrian forces in their fight against the Takfiri terrorists.

Brigadier General Hamadani was martyred during an attack by the ISIL Takfiri terrorists in the outskirts of the city of Aleppo while fulfilling his duty as military advisor and defending the holy Shiite shrines in the country, the IRGC said in a statement on October 9.

General Hamadani was in Syria to render military advice to the Syrian army and popular forces in their fight against the ISIL terrorists in the Arab country.