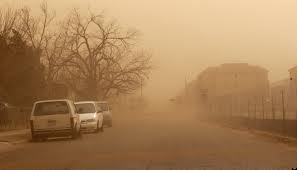 The government lacks the financial resources to effectively battle the crippling dust storms that have dogged more than two-thirds of Iran, according to the head of the Department of Environment’s task force to combat dust particles.

“To effectively deal with the phenomenon of dust storms, about $1.45 billion are needed. But the government does not have the financial means to fund the efforts,” ILNA quoted Ziaeddin Shoaei as saying.

He said a comprehensive plan to curb dust storms in the 23 afflicted provinces has been prepared, but the plan will first be implemented in provinces severely hit by the storms due to the lack of funds.

“The concentration of dust particles in the air was so high that it exceeded the 10,000-microgram per cubic meter limit of our monitoring sensors,” he said.

Shoaei said Khuzestan’s ongoing battle with drought has worsened the situation in the oil-rich province, which has borne the brunt of dust storms in recent years.

“Lack of water means farmlands are abandoned and turned into sources of dust storms, which only serve to aggravate the problem,” he said.

Recent studies show that a wind blowing at 5 meters per second is capable of producing dust storms in Abadan, whereas normally winds as strong as 20 m/s start dust storms.

“This shows that sources of dust storms in the province are expanding,” he said, adding that Khuzestan currently has 600,000 hectares of barren lands that only exacerbate the problem.