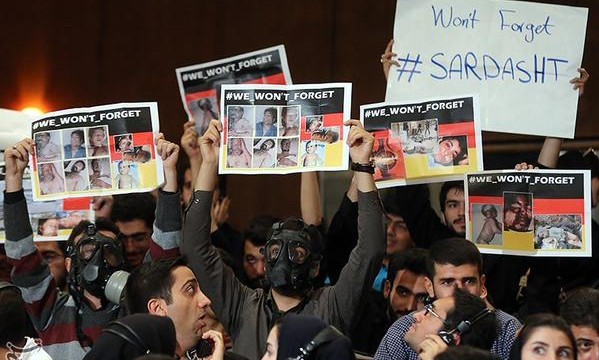 Tehran, October 18, The Iran Project – A Number of the Iranian university students voiced their objections to the Germany Government during the foreign ministry speech on Sunday morning at the University of Tehran.

During the German Foreign Minister Frank-Walter Steinmeier’s speech at the University of Tehran’s library hall, some students criticized the German Government stances to support Saddam Hussein chemical warfare against Iran. They denounced the Germany policies during the Iraq-Iran war, holding the chemical war victims photos and banners both in English and Farsi that read: “we won’t forget Sardasht”, “2000 martyrs and chemical veterans in Sardasht; the Germany gift to Iran” and “the development and sustainable peace is not possible with chemical weapons”. The German foreign minister delivered a speech in the conference on “Education for Sustainable Development and Stability” at the University of Tehran. Earlier he attended the high profile Munich Security Conference’s core group meeting in Tehran on Saturday to discuss the regional affairs and the latest developments in the Middle East.

The top German diplomat arrived in Tehran on Saturday on a two-day visit, a first such visit by a German foreign minister in 12 years.