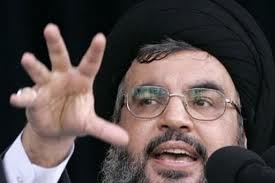 Enemy not safe as long as resistance exists: Hezbollah chief

In his Sunday speech, Nasrallah said the resistance front has gained many victories through the sacrifices made by its courageous fighters, saying the movement will continue despite the martyrdom of its commanders in the battlefield against terrorists.

Touching on the tensions in the Israeli-occupied Palestinian lands and the new wave of Israeli violence there, the Hezbollah chief called on all sides to stand by the oppressed Palestinian nation its Intifada against the occupying regime of Tel Aviv.

He pointed to the “Takfiri project” in the Middle East, saying were it not for the steadfastness of resistance fighters on the battlefield against Daesh and other extremist groups, the situation of this region would be even worse.

Referring to the Saudi aggression against Yemen, saying if Saudis manage to break the resistance of the Arab nation, al-Qaeda and Takfiri elements will be able to step up their terror activities there.

The resistance front is determined to fulfill its responsibility and pursue the fight against Takfiri terrorism to defend all Muslims and human values in general.