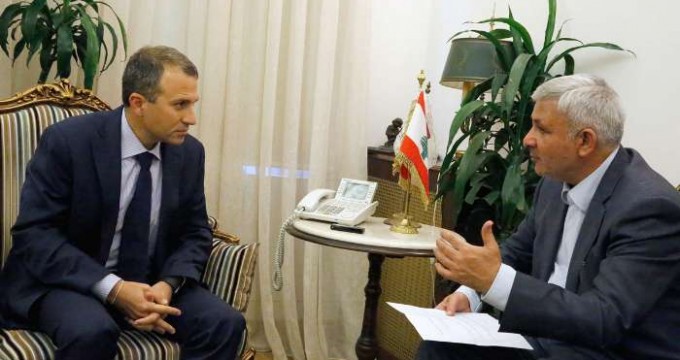 Beirut, Oct 16, IRNA – Lebanese Foreign Minister Gebran Gerge Bassil said on Friday that nuclear deal between Iran and the western governments will change regional and international equations, adding that economic cooperation will be pivot of Tehran-Beirut ties at this juncture.

In an exclusive interview with IRNA on the threshold of his Tehran visit, he underlined Iran-Lebanon strong ties, saying that the Islamic Republic of Iran has always assisted Beirut and ready for economic and military help vis-a-vis the Israeli occupying regime.
Although this is not Bassil’s first visit to Tehran as Lebanese foreign minister, special situation in the region have given a specific importance to it.
Middle East is witnessing basic and determining changes such Iranian nuclear deal with the western governments and Russian direct involvement against terrorism in Syria and is waiting for their outcome.
Bassil said that the reason for his upcoming visit to Tehran is invitation of his Iranian and German counterparts to take part in International (Munich) Security Conference slated for October 17.
He further noted that his Tehran visit is a suitable opportunity for talks with the Iranian officials on exploring bilateral ties, especially in the fields of economy and commerce.
Bassil also maintained that his trip is significant from political perspective because it will provide a chance for negotiations on establishing stability in the region and fighting terrorism and international bid for peace.
Lebanese foreign minister said that he is optimistic about Iranian nuclear deal and contended that the accord will bring about changes in the region and will lead the region out of recession, providing a new opportunity for international campaign against terrorism.
Bassil hailed Iran’s role in fighting terrorism, saying that it has also supported resistance movement to Israeli occupation of the Palestinian territories.
He called for formation of a front comprising Sunni, Shia, Kurd and Christian forces for fighting Tafiri terrorists.
Elsewhere in his remarks, the Lebanese official said that using arms and hostile methods against the Syrian administration has taken away the attribute of moderation from the terrorist groups.
On Russia’s involvement in anti-terror campaign in Syria, he said that Russia took the steps following incompetence and inability of the US-led coalition.
Some 80 countries led by the US had entered the war against ISIL since 16 months ago, but they were completely a failure, Bassil said.
As to Iran-Lebanon ties, he described bilateral ties as excellent, saying that today, Iran is ready to help Lebanon as it did during conflict with the Israeli occupying entity.
Today, Iran is ready to provide the Lebanese army with arms and contribute to its economy but the sanctions deprived Lebanon of economic cooperation with Iran, he said.
Bassil hoped that Lebanese Middle East Airlines would launch direct flights between Tehran and Beirut in future.