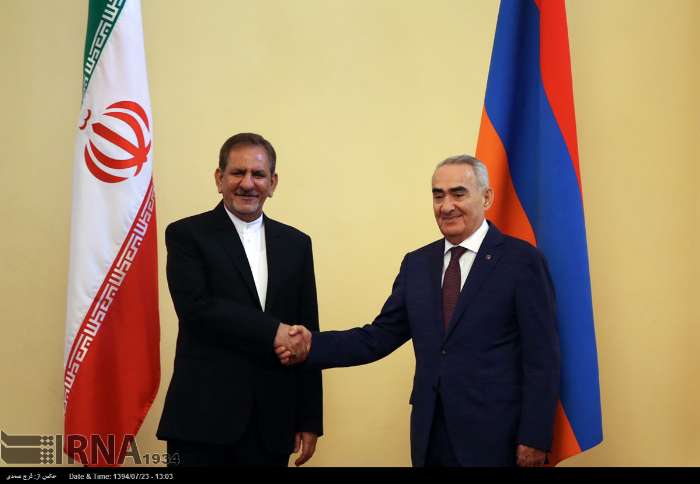 Tehran, Oct 15, IRNA – First Vice President Eshaq Jahangiri said on Thursday that Iranian and Armenian parliaments can play a very effective role in broadening of economic and commercial ties between the two countries.

Jahangiri made the remarks in a meeting with the Armenian Speaker of National Parliament Galust Sahakyan in Yerevan on Thursday.

Having cultural and historical commonalities, relations between Iran and Armenia are at a very satisfactory level, Jahangiri said.

Iran enjoys a very special status in the Middle East region as well as in the Persian Gulf and the country is very rich in terms of natural resources and workforce which can help broaden relations with Armenia, Jahangiri said.

Jahangiri advised the regional countries to help resolve current disputes through negotiations and do their best to halt bloodshed and extremism.

Iran and Armenia should convey the cry of oppressed nations in the region to the world public opinion and invite other countries in resolving the current crisis in Syria and Yemen, Jahangiri said.

Regional problems should be resolved through peaceful negotiations, Jahangiri said.

The Iranian government during 18 months of intensive talks with six world powers could successfully put an end to the country’s nuclear dossier, he said.

It is expected that economic sanctions against Iran be terminated at the earliest, he said.

Talks could be regarded as a very good sample in resolving disputes and preventing bloodshed and plight of people, Jahangiri said.
Armenian parliament speaker, for his part welcomed friendly and sincere relations between the two countries and said he believes that growing relations have roots in mutual trust.

Current level of economic cooperation should be enhanced, said the Armenian parliament speaker.

Iran and Armenia have always adopted balanced and appropriate stands in dealing with regional crisis, he said.

He expressed the hope to visit Iran at the earliest opportunity in order to meet his Iranian counterpart.