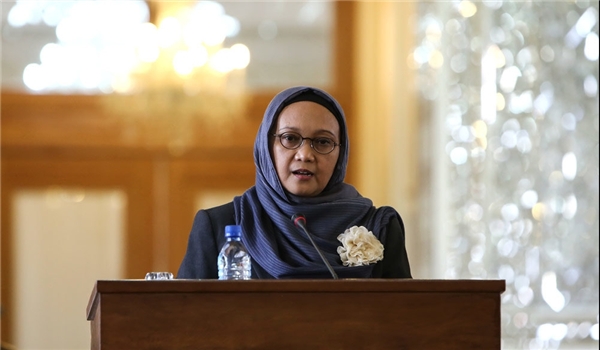 Marsudi told reporters in Tehran on Wednesday that as the foreign minister of the country with the largest Muslim population “I announced in the UN that Indonesia and Iran are playing a big role in strengthening the foundations of democracy, patience, and campaign against terrorism”.

On excellent Iran-Indonesia relations, Marsudi said that in the course of the past 6 months six high ranking Indonesian delegations at ministerial level have visited Iran.

A high ranking Indonesian delegation led by Marsudi and comprised of that country’s energy minister and heads of state oil companies arrived in Tehran on Wednesday morning.

In April, Iranian and Indonesian Presidents Hassan Rouhani and Joko Widodo in a meeting in Jakarta explored different avenues for the further consolidation of relations between the two countries.

Also in June, Indonesian Energy Minister Sudirman Said underlined that his country was keen to increase its long-term crude imports from Iran.

Jakarta is in talks with Tehran for a long-term oil supply deal to meet its rising demand for crude as the country is expanding its refineries,” Sudirman said.

He reiterated that his country was waiting for the removal of the western sanctions imposed against Tehran.