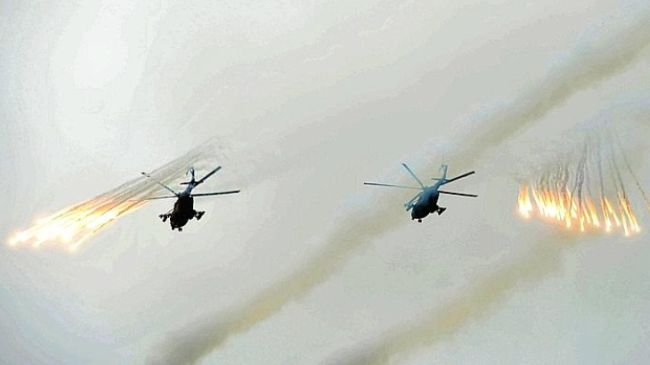 Are Russian airstrikes in Syria successful?

Alwaght- Backed by Russian airstrikes, the Syrian army has advanced in recent days in the central province of Hama.

On Sunday, Syrian troops engaged on multiple fronts in the northern part of Hama as well as the adjacent Idlib province.

The AP news agency quoted an anonymous Syrian military official as saying that army forces have seized the northern village of Tak Sukayk which is located in Hama.

Meanwhile, the UK-based Syrian Observatory for Human Rights said the Syrian army and Hezbollah fighters regained control of the town of al-Bahsa northwest of Hama.

Russia began conducting air strikes as part of an air-and-ground offensive waged against ISIS terrorists and other “terrorists.”

These other “terrorists” include al-Nusra Front terrorists and members of foreign-backed armed groups.

While the Obama administration has warned the Russians that their military intervention will fuel extremism in the country, figures are showing that it may be the other way around.

The Russian Defense Ministry disclosed on Monday that Russia’s Air Force has conducted 55 sorties in Syria, targeting 53 ISIS facilities. 25 ISIS positions, training camps, command centers, and ammunition depots have been destroyed in the past 24 hours alone.

“Russian air and space reconnaissance continues to pinpoint new objects 24 hours a day of the Islamic State’s terrorist infrastructure in the Syrian Arab Republic to be destroyed by Russian air groups,” Maj. Gen. Igor Konashenkov said at a briefing.

At least 300 terrorists have been killed since the beginning of the air campaign last week.

On the other hand, the US-led coalition in Syria has failed to accomplish key objectives in Syria since it began operations in September 2014.

In fact, the Wall Street Journal published an article in 2015 based on US and independent assessments saying that more than three months of US airstrikes in Syria after they began failed to prevent ISIS from expanding their control in that country.

“…fighters have enlarged their hold in Syria since the U.S. started hitting the group’s strongholds there in September,” the article stated.

The US Department of Defense said the US carried out 2,487 strikes in Syria since September while the rest of the coalition did so 135 times. However, no specific number of killed ISIS terrorists is available.

The difference between the US and Russian approaches towards bombing ISIS is not strict to numbers.

First significant disparity is the fact that Moscow is carrying out a relentless anti-terrorist strategy while the western alliance’s line of attack is two-fold. While carrying out an airstrike or two a day, the US administration was also training militants at the same time not to mention the ‘accidental” supply drops to extremists.

“It’s a mixed picture, but the mixed picture very much reflects the very mixed geography of the battle lines in Syria,” he said.

Second difference is that there is no on-ground coordination between the US-led coalition and the Syrian army. Air strikes alone won’t do the job. With the Russians using the strikes to back ground offensives, the rate of success is much higher.

Russian President Vladimir Putin has infuriated Syrian President Bashar Assad’s enemies-both regionally and internationally. The US, Turkey, and Saudi Arabia in particular have responded harshly to the Russian move.

“The Russian intervention in Syria will engage them in a sectarian war…The Saudis will continue strengthening and supporting the moderate opposition in Syria,” he added.

However, such responses from the funders and backers of the terrorist groups fighting against the government in Damascus reflect the disapproval over whatever success the Russian involvement may draw on the battlefield.