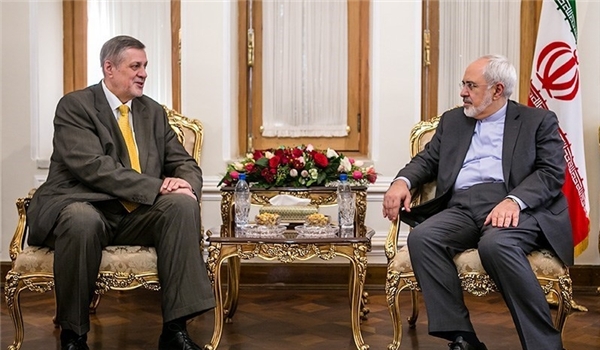 In a Sunday meeting with the UN special envoy for Iraq, Yan Kubish, in Tehran, the Iranian foreign minister denounced support for terrorist groups, including Daesh Takfiri militants, and said, “The international community should block the continuation of direct and indirect support for these groups.”

He added that the US-led coalition purportedly fighting the Daesh terrorist group in Iraq has had a weak and unacceptable performance.

Stressing that the situation in Iraq has an important and direct impact on stability and security of the entire Middle East, Zarif urged the international community to support the Iraqi government in its fight against terrorism.

The Iranian minister reaffirmed the Islamic Republic’s support for Iraq’s unity and territorial integrity in the neighboring country, saying, “Any solution [to the tension in the Arab country] should strengthen unity, security and stability in Iraq and the region.”

Since September 2014, the US, along with some of its allies, has been conducting air raids against what are said to be positions of Daesh terrorists inside Syria without any authorization from Damascus or a UN mandate.

The air assaults in Syria are an extension of the US-led aerial campaign against purported Daesh positions in Iraq, which started in August 2014.

The UN envoy, for his part, said reinforcing national unity in Iraq is the key to the settlement of the ongoing problems in the country.

Kubish added that national reconciliation, support for the central Iraqi government and efforts to win global participation to settle security, economic and social problems in Iraq are among priorities of the United Nations.

In a meeting with Kubish in Tehran on Sunday, Ali Akbar Velayati, a top adviser to Leader of the Islamic Revolution Ayatollah Seyyed Ali Khamenei, expressed regret over the US plans to split Iraq.

“Unfortunately, certain countries, particularly the US, seek to break up Iraq and think that in that case, all the country’s problems will be settled, but it should be emphasized that such a thing is not correct,” Velayati said.

He added that the united Iraqi people, comprising of Shias, Sunnis and Kurds, would not allow the realization of such plots.

“We welcome any international bid under the supervision of the United Nations to achieve peace, security and stability in Iraq,” the Iranian official said.

He called on all Iraqi groups to support Baghdad government in an effort to stop instability in the country.

Daesh militants currently control areas of land in Iraq and Syria, where they have killed many people in acts of horrific violence.