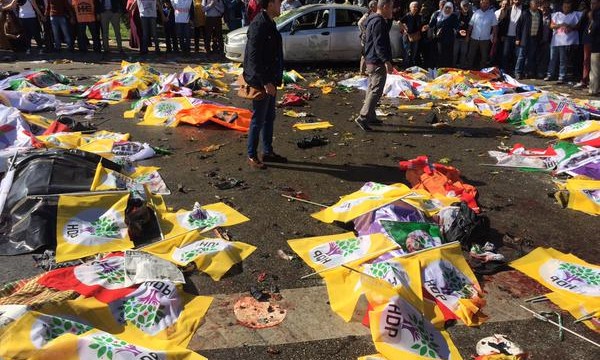 At least 86 people have lost their lives in two large explosions that rocked a road junction in the center of Turkey’s capital, Ankara, officials say.

The blasts occurred at 10:04 a.m. local time (0704 GMT) on Saturday outside the main train station in Ankara, where a group of demonstrators had gathered for an anti-government peace march.

Witnesses said several dead bodies were seen scattered on the floor at the site of the blasts.

Authorities in Ankara say the blasts were a terrorist attack. They are investigating the possibility that a bomber might have been behind the explosions, according to the Anadolu news agency.

“We are investigating the explosion and will share our findings with the public as soon as possible,” a Turkish official told AFP, without providing more details.

Turkish Prime Minister Ahmet Davutoglu is set to hold an emergency meeting with security forces over the explosions.

People walk among the bodies of people killed in a blast at a peace rally in Ankara, Turkey, on October 10, 2015. (© AFP)

The leftist groups in Turkey, including the pro-Kurdish Peoples’ Democratic Party (HDP), had organized a pro-peace demonstration at the site of the blasts to slam the clashes between Turkish forces and militants of the Kurdistan Workers’ Party (PKK) ) in the country’s southeast.

There has been a deadly conflict between the PKK and Turkish security forces since July, when Turkey began airstrikes against purported Daesh targets in Syria as well as PKK positions in Turkey.

A shaky ceasefire between Ankara and the PKK that had stood since 2013 was declared null and void following the Turkish military campaign against the militant group, which been fighting for an autonomous Kurdish region inside Turkey since 1984.

HDP leader Selahattin Demirtas slammed the blasts and said, “We are faced with a very big massacre, a vicious, barbarous attack.”

Turkish President Recep Tayyip Erdogan also censured the “heinous attack,” which he said targeted the “unity” and “peace” in the country, describing “solidarity and determination as the most meaningful response to terror.”

In July, 32 activists of the Socialist Youth Associations Federation (SGDF) are killed after a bomb attack targeted their gathering in Sanliurfa Province’s town of Suruç. Ankara blamed the assault on the Daesh Takfiri group.