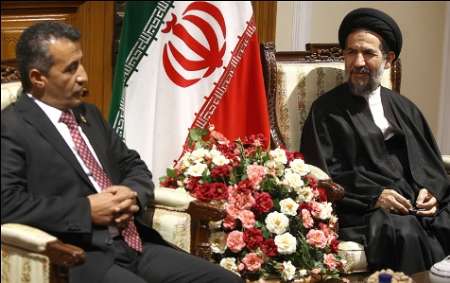 He made the remarks in a meeting with Vice-Chairman of the High Council of Yemen’s Revolution Naïf al-Qanis here on Wednesday.
Referring to resistance of Yemeni people against aggressors, the senior MP said that recent events in Yemen show the exclusive image of a brave nation and indicated that bombardment and military arsenal can not bring a nation to its knees.
He said that roots of terrorist groups are being strengthened from inside of the Saudi regime.
Naif al-Qanis appreciated Iran’s supports for Yemeni nation and said that Iran is a safe heaven for oppressed people of Yemen.
Referring to dissemination of information and notifying world people about human catastrophe in Yemen, Qanis also said that world media by financial manipulation of the Saudi regime are ignoring the disasters in Yemen.
Members of High Council of Yemen Revolution, who arrived in Tehran on Monday, met with Head of Expediency Council’s Strategic Research Center Ali Akbar Velayati and Deputy Foreign Minister for Arab-African Affairs Hossein Amir-Abdollahian on Wednesday.