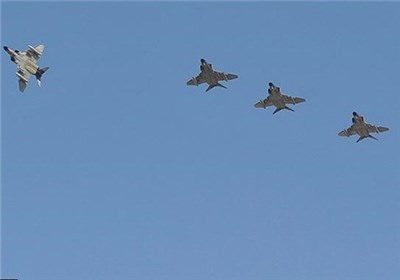 Russia has conducted over 100 airstrikes against the positions of the Daesh terrorist group across Syria over the past week, striking 110 targets and triggering panic among other terror groups, says the Russian Defense Ministry.

According to the report, the aerial campaign across Syria over the past eight days was aimed at undermining the ability of foreign-backed terrorist forces to launch persisting raids and terror attacks in the country and allow Syrian forces to regroup and launch offensives against the armed militants.

Among the positions targeted in the air raids were Daesh strongholds in the northeastern city of Raqqa as well as in the ancient city of Palmyra in the west and on the outskirts of the capital, Damascus. The air attacks have reportedly driven thousands of Takfiri terrorists from their positions and out of the country.

Moreover, in a new development on Wednesday, the Russian Navy launched dozens of cruise missiles at terrorist targets in Syria from its warships in the Caspian Sea waters. Moscow’s Defense Ministry has also released video footage of the missile launches.

“[Last] night the ship strike group of the Russian Navy, consisting of the Dagestan missile ship, the small-sized missile ships Grad Sviyazhsk, Uglich and Veliky Ustyug launched cruise missiles against ISIS (Daesh) infrastructural facilities in Syria from the assigned district of the Caspian Sea,” the Defense Ministry noted in a comment accompanying the released video image.

The ministry further said that the attack was launched “by high-precision ship missile systems Kalibr NK, the cruise missiles of which engaged all the assigned targets successfully and with high accuracy.”

Moscow began its military campaign against terrorists in Syria on September 30 upon a request from the Damascus government, shortly after the upper house of the Russian parliament gave President Vladimir Putin the mandate to use military force in Syria.