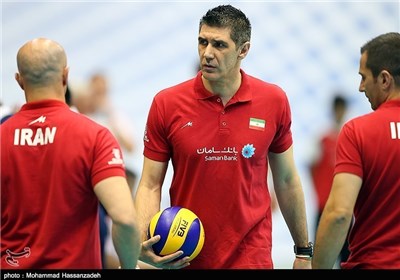 TEHRAN (Tasnim) – Following a poor run of results in the 2015 FIVB World Cup, reports are spreading that the Iranian national volleyball team’s coach Slobodan Kovac is likely to be sacked.

The Iranian volleyball team failed to qualify for the 2016 Olympic Games in Rio through World Cup in Japan, finishing eight out of 12 teams.

Afterward, Kovac said that the Iranian Volleyball Federation has a problem with him since he has hired his compatriots as assistants and the federation wants Iranians to be in the coaching staff.

“We need to strengthen our coaching staff ahead of the 2016 Olympic Games qualification which will be held in Japan. Kovac will be sacked if he doesn’t change his way,” head of Iran’s Volleyball Federation Mohammad Reza Davarzani said.

“We suffered several bad defeats in the 2015 FIVB World Cup. Expectations are high for Iran volleyball team and we need to show a better performance in our upcoming events,” he added.