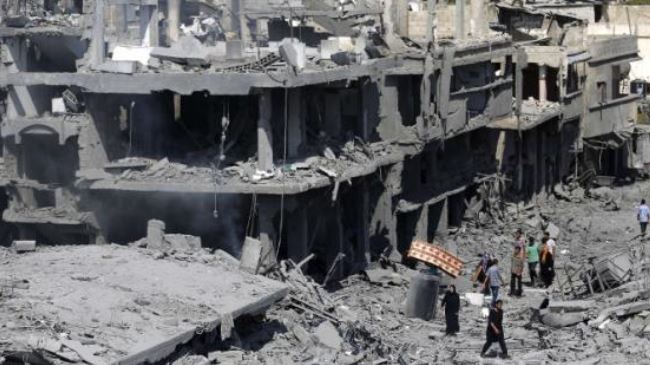 Israeli fighter jets have launched airstrikes on an area in the central Gaza Strip while another Palestinian is shot to death by Israeli troops.

The early Monday attacks, which hit two sites belonging to the armed wing of the Palestinian resistance movement Hamas, were carried out after rockets were allegedly fired from the enclave towards an uninhabited area in southern Israel.

There has been no word on the possible casualties and damage inflicted by those strikes.

According to doctors and police sources, Huzeifa Othman Suleiman, 18, succumbed to his wounds after being transported to a local hospital.

Suleiman is at least the third Palestinian killed by Israeli troops since Saturday, amid simmering tensions between Israel and the Palestinians in the area.

Earlier in the day, Israeli forces fatally shot a young Palestinian, identified as Fadi Samir Mustafa Alloun, near the al-Aqsa Mosque compound in the Israeli-occupied Old City of al-Quds (Jerusalem), citing he was involved in stabbing of an Israeli illegal settler.

On Saturday, Israeli forces shot dead a Palestinian claiming he was complicit in the stabbing.

Israel’s 50-day military aggression against the Gaza Strip, which started in early July and ended on August 26 last year with a truce that took effect after indirect negotiations in the Egyptian capital Cairo, left nearly 2,200 Palestinians, including 577 children, dead. Over 11,100 others – including 3,374 children, 2,088 women and 410 elderly people – were also wounded.