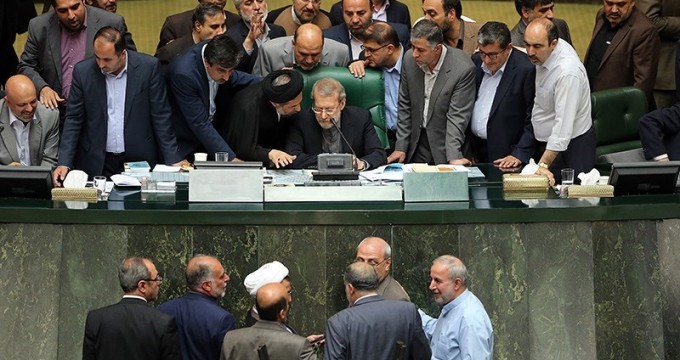 Tehran, Oct. 4, The Iran Project – The Supreme Leader’s remarks at the graduation ceremony of army officers, the death of Persepolis captain Hadi Norouzi and the JCPOA committee’s final report dominated the country’s media outlets in the past week (28 Sept.-4 Oct.).

Russian president calls for removal of west’s sanctions on Iran

Russian President Vladimir Putin in a meeting with his Iranian counterpart Hassan Rouhani underlined his country’s resolve in removing the oppressive sanctions imposed by the West against Iran.

Iran’s foreign ministry summoned Saudi Arabia’s charge d’affaires for the fourth time in a week to protest Riyadh’s failure to deal with the aftermath of a recent crush in Mina that led to the deaths of at least 239 Iranians.

The funeral ceremony for the seven Iranian pilgrims dead in stampede during the Hajj pilgrimage rituals in Mina, near Mecca, held in Tehran University on Sunday.

Hossein Naqavi Hosseini, spokesman for the Majlis(parliament) special committee on Joint Comprehensive Plan of Action(JCPOA) briefed lawmakers on the committee’s final report on the issue.

What Rouhani’s done to fight corruption

There has been a lot of talk in Iran about fighting administrative and financial corruption over the past decade. Yet, corruption has not diminished. Rather, the phenomenon has continued to plague the Iranian economy. High-level meetings, including regular sessions attended by the heads of the three branches of government, have so far failed to produce any tangible improvement.

Despite the crisis facing Iran’s car industry, the country aims to produce three million cars annually as part of a 10-year Vision Plan, a third of which will be exported, according to the minister of industries, mining and trade.

Vice president for legal affairs said Iran’s new oil contracts which were verified by the cabinet last week will be attractive to investors while securing the country’s interests and maintaining its sovereignty over the oil reservoirs.

Commander of the Islamic Revolution Guards Corps (IRGC) has stressed that Iran’s army has the most decisive role in the region.

Commander of the Islamic Revolution Guards Corps (IRGC) said his forces are ready to defend Muslims’ dignity, the Iranians’ in particular, when necessary at any time or region.

Islamic Revolution Guards Corps (IRGC) Navy Commander Rear Admiral Ali Fadavi said the conflict between Tehran and Washington will never end, implying that the US would never tolerate an independent actor like Iran.

Tehran’s already-questionable air quality is expected to worsen following the start of the new academic year. According to Tehran Air Quality Control Company, the new school year, which began last Wednesday, brought with it a 20% increase in traffic that resulted in a 198-ton increase in air pollutants, Mehr News Agency reports.

One of the most crucial components in the sustainable development of any country is preserving the environment, says Vice President and Head of the Department of Environment Masoumeh Ebtekar.

Persepolis of Tehran captain Hadi Norouzi died at the age of 30 after suffering a heart attack in his sleep on Thursday.

Conductor of the Tehran Symphony Orchestra, maestro Ali Rahbari, has been invited to have a performance at Bratislava Music Festival.

A new poll conducted by a Cairo-based center has found that the majority of Egyptian people view Israel as the most hostile regime.

Russia’s Defense Ministry has announced a fresh “surgical airstrike” by Russian jet fighters against the positions of the militants of the Daesh terrorist group in Syria , knocking out the battle headquarters of the Takfiri militants near the Northeastern city of Raqqa.

Patients were burned to death in US airstrike on clinic in Kunduz, survivors say

The survivors of a US airstrike on a clinic run by Doctors Without Borders in Kunduz, northern Afghanistan, say those patients unable to move were burned to death during the assault.

Iraqi Prime Minister Haider al-Abadi says his country is ready to share intelligence on Daesh with Iran, Russia, and Syria upon their request.