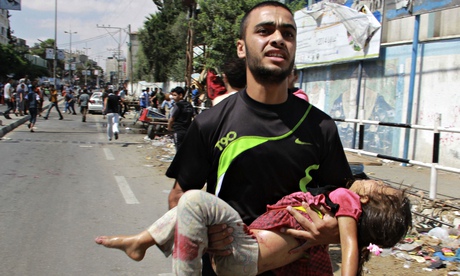 A Palestinian child has sustained critical gunshot wounds after an Israeli settler opened fire on him in the northwestern part of the occupied West Bank.

The six-year-old Palestinian kid, identified as Yousef Bayan al-Tabib, was standing on the side of a road in Izbeit at-Tabib village, located around 10 kilometers (6.2 miles) east of Qalqiliya, on Saturday, when the settler stopped his car, shot the child in the stomach, and then drove off, Ma’an news agency reported.

Tabib was ferried to the Qalqiliya hospital to receive medical treatment.

An unnamed Israeli army spokesperson said they have launched an investigation to determine the circumstances surrounding the attack.

Israeli settlers have, in recent years, carried out various attacks on Palestinians and their property in the West Bank and East al-Quds.

The development came on the same day as Israeli military forces stormed the al-Aqsa Mosque compound in al-Quds forcing dozens of Palestinian worshipers to leave the sacred site.

Israeli troopers entered the compound after evening prayers and forcibly evicted up to 70 Palestinians. Israeli soldiers reportedly climbed on the mosque’s roof and caused damage to one of its minarets.

Israeli forces and Palestinians have been clashing at the al-Aqsa Mosque compound for weeks.

On September 17, Riyad Mansour, the Palestinian ambassador to the United Nations, lashed out at the UN Security Council for its failure to condemn the ongoing Israeli aggression against Muslim worshipers at the holy place of worship

Israel has applied sweeping restrictions on entries into al-Aqsa Mosque compound since August 26.

The site is Islam’s third holiest place after Masjid al-Haram in Mecca and Masjid al-Nabawi in Medina, both in Saudi Arabia.