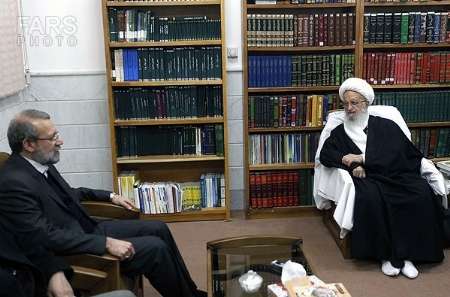 Larijani: Saudi govt forced to be accountable in face of Iran pressures

Speaking to grand Ayatollah Nasser Makarem Shirazi on Friday, Larijani said, ‘Saudi government, which was not accountable in connection with status of Hajj pilgrims and the victims, had to cooperation and be responsive.’
He said that however, Saudi Arabia has not been seriously cooperating with regards to transfer of the bodies of the Hajj pilgrims; preliminaries have been arranged for the purpose; however, the core of the task, i.e. delivery of the body of the victims, has not yet been fulfilled.’
He went on to say that based on the statistics available, between 7,000 and 8,000 people lost their lives in Mina catastrophe and Saudi government buried bodies of about 800 of the Hajj pilgrims, mostly Africans, in its own territory.
Majlis speaker said such events have taken place during Hajj for many years, testifying that Saudi management of Hajj rituals is weak.