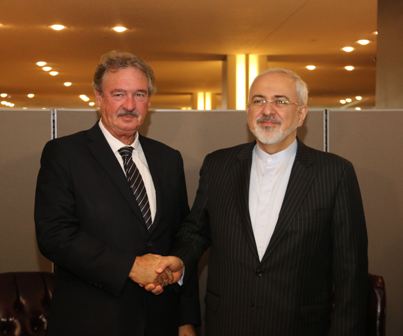 New York, Sept 30, IRNA – Iranian Foreign Minister Mohammad Javad Zarif in a meeting with his Luxembourg counterpart Jean Asselborn here on Wednesday called for EU’s more active role in preventing the massacre of the Yemeni people and the Mina tragedy.

‘We want EU to play a more active role in preventing the killing of the people of Yemen and also following up the Mina tragedy,’ Zarif said during the meeting.

Asselborn, for his part, pointed to the good neighborly relations between Luxembourg and Iran and the preparations for removal of EU’s sanctions and expansion of bilateral ties.

The Luxembourg foreign minister pointed to the importance of Iranian President Hassan Rouhani’s speech at the UN General Assembly and the fight against terrorism and the ISIL.

‘Luxembourg and the European Union are trying to help the deteriorating humanitarian situation in the regional countries and Iran’s assistance in this regard is highly important,’ Asselborn added.