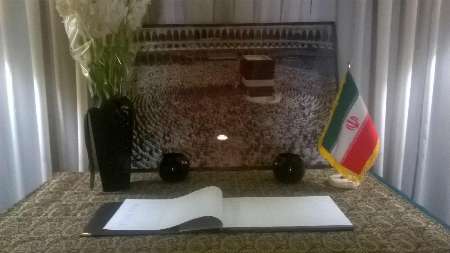 Islamabad, Sept 30, IRNA – Iranian Embassy in Pakistan opened a book of Memorandum for the victims of this year’s Hajj tragedy which claimed lives of over 4,000 pilgrims, including 239 Iranians.

The book is to be signed by officials and ordinary people to commemorate the victims of the Hajj catastrophe.

Similar ceremonies are to be held simultaneously in Iranian embassies all over the world on the same occasion.

According to reports the tragic stampede happened when two large groups of pilgrims arrived together at a crossroads in Mina, a few kilometers east of Mecca, on their way to performing the ‘stoning of the devil’ ritual at Jamarat.
The event serve to raise the name of Hajj victims in the world and initiate a wave to condemn the incompetence and mismanagement of the Saudi officials in administrating Muslims largest annual ritual.

So far, 239 Iranian pilgrims have been confirmed dead with 14 others wounded.

Some 241 Iranian pilgrims are still missing.