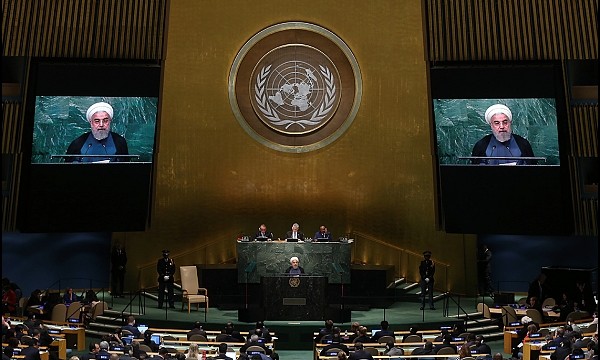 ‘The nuclear deal, which is a brilliant example of ‘victory over war’, has managed to disburse the clouds of hostility and perhaps even the specter of another war and extensive tensions from the Middle East. The deal can and should herald a new era and lead to positive outcomes regarding the establishment of sustainable peace and stability in the region. From our point of view, the agreed-upon deal is not the final objective, but a development which can and should be the basis of further achievements to come,’ he said.
‘Considering the fact that this deal has created an objective basis and set an appropriate model, it can serve as a basis for foundational change in the region,’ added President Rouhani.
‘Our policy is to continue our peace-seeking efforts in the region based on the same win-win principle, and act in a way that would lead to all in the region and world benefitting from these new conditions. This opportunity can be seized in order to look to the future and avoid focusing on the past and rebuild our relationships with the countries in the region, particularly with our neighbors, based on mutual respect and our common and collective interests,’ he said.
‘Unfortunately, the Middle East and North Africa has turned into one of the world’s most turbulent regions. With the continuation and intensification of the current condition, the turmoil can spread to other parts of the world. In today’s interconnected and borderless world, countries and regions encounter great difficulty in protecting their borders and preventing the spread of insecurity and instability,’ added the Iranian president