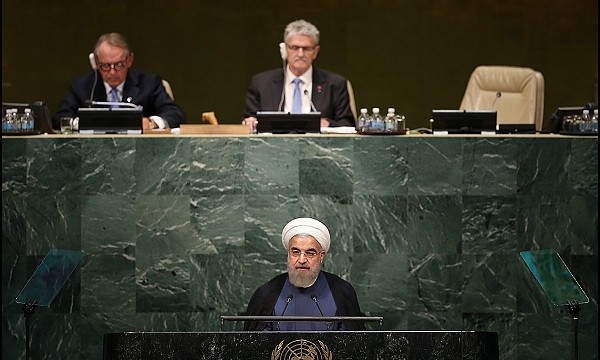 New York, Sept 28, IRNA – President Hassan Rouhani said on Monday that countries such as Iraq, Syria and Yemen are all examples of crises being stoked through terror, extremism, violence, bloodshed, invasion and the indifference of the international community.

President Hassan Rouhani made the remarks in his keynote speech delivered at the United Nations General Assembly on Monday.

These countries are similar examples displaying cases of displacement, homelessness and fleeing from the horrors of war and bombardment, said the Iranian president.

Their problems have persisted because the international community has failed them and because of incorrect actions of newcomers to the region and naive trans-regional actors. Consequently, the wave of destruction has gone beyond the Arab world and reached the gates of Europe and the United States and has resulted in the destruction of the relics of civility and precious works of ancient civilizations and, more broadly, has resulted in the death of humanity.

‘We must not forget that the roots of today’s wars, destruction and terror, can be found in the occupation, invasion and military intervention of yesterday.’ said President Rouhani.

‘If we did not have the US military invasion of Afghanistan and Iraq, and the US unwarranted support for the inhumane actions of the Zionist regime against the oppressed nation of Palestine, today the terrorists would not have an excuse for the justification of their crimes,’ said President Rouhani.