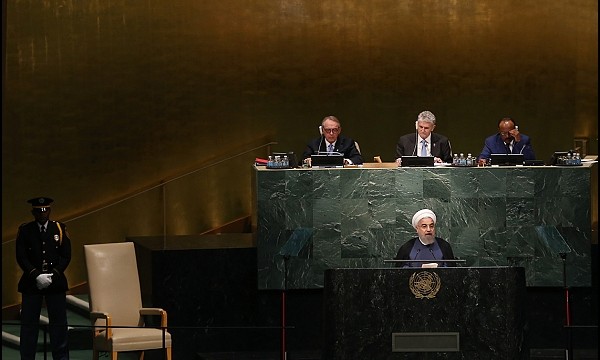 Rouhani calls for creating a ‘United Front Against Extremism and Violence’

New York, Sept 27, IRNA – Speaking in his address to the 70th United Nations General Assembly on Monday, President Hassan Rouhani called for creating a ‘United Front Against Extremism and Violence’.

‘In 2013, from this very stage, I called for combating violence and extremism. Consequently, you, the representatives of the international community, unanimously gave it a seal of endorsement and hence, the WAVE resolution came to be,’ the president said.
‘The implementation of WAVE requires well-intended solutions and the use of experiences gained in the realm of diplomacy. I am pleased that by placing together the support for the JCPOA with the invaluable support for WAVE, we may now devise a plan to resolve the problems of a shattered Middle East under the claws of brutality and savagery,’ the president added.
‘With a view to fighting ignorance, dictatorship, poverty, corruption, terrorism, violence and their social, political, cultural, economic and security impacts, I would like to invite the whole world and especially the countries of my region to form a ‘joint comprehensive plan of action’ to create a ‘United Front Against Extremism and Violence’.’
Rouhani said that this front must:
– Create a collective and global movement to tackle regional problems in a serious manner through dialogue;
– Prevent the slaughter of innocent people and the bombardment of civilians, as well as, the promotion of violence and killing of other human beings;
– Provide for stability in cooperation with established central governments to maintain stability
– And once stability is established, build diplomacy and democratic governance in the Middle East region.