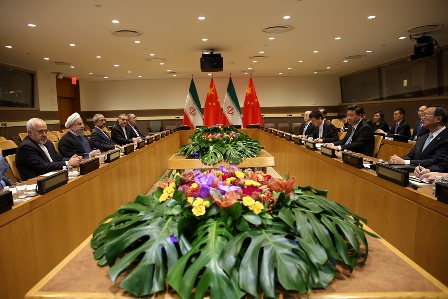 New York, Sept 28, IRNA – Iranian President Hassan Rouhani in a meeting with his Chinese counterpart Xi Jinping here on Monday underlined China’s important role in the success of the nuclear talks between Tehran and the six world powers.

‘No power can influence good relations between Tehran and Beijing,’ President Rouhani said.

‘The Islamic Republic of Iran will not forget its friends that had good relations with the country during the difficult conditions of sanctions,’ he added.

‘We are sure that our relations with China is in such a manner that no power can influence their friendly relations,’ the president went on to say.

The Chinese president, for his part, said that China and Iran have shared many commonalities in bilateral relations as well as international and regional issues and they have consolidated their cooperation at the highest level.

‘Iran and China can further broaden this trend through their cooperation in a bid to bring more welfare for their nations,’ he added.