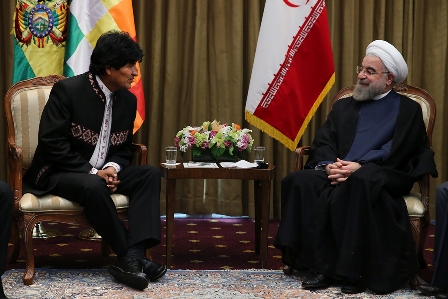 ‘Resistance and resilience of the nations and governments against world powers will secure their victory, as was the case in the nuclear negotiations in which the Iranian nation attained its obejective,’ he said in the meeting with Bolivian President Evo Morales.

Saying that relations between Iran and Bolivia are close and friendly, Rouhani said no third party can decide about their bilateral relations.

‘Latin American countires, notably Bolivia, are of special importance for Iran. We have to endeavor for the development of all-out relations,’ he said.

He said Iran’s achievement in the nuclear negotiations was a success for its friends worldwide and added, ‘The message of the nuclear agreement with Iran is that powerful countries should know that they can never stand before a nation’s will.’

Morales said, Iran’s success in the nuclear negotiations is an achievement against imperialism.

He stressed solidarity of developing nations and called for formation of the joint economic and trade commission between Iran and Bolivia.

Also in the meeting with Ecuadorian President Rafael Correa, President Rouhani said Iran is ready to raise its relations with the Latin American nation in economic, scientific, and cultural fields.

‘Indpendent nations must have a single voice in the international forums including the United Nations Organization so that powerful countries understand that nations are not alone,’ he said.

Rouhani also said the new conditions after nuclear agreement and lifting of sanctions will provide an opportunity to be seized.

Correa said the government and people of Equador are happy over Iran’s success in standing against the world powers and admire its resistance and civlization.

He supported expansion of relations with Iran and called for stability of the energy market.