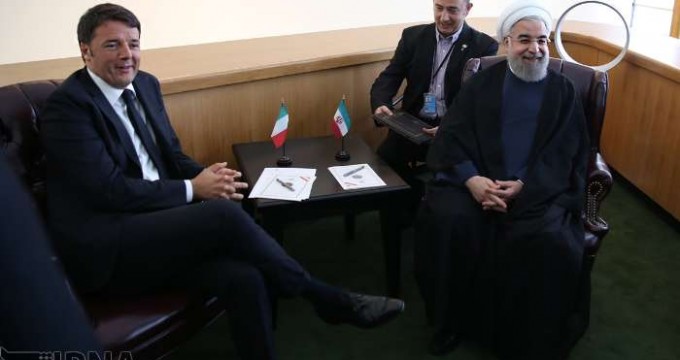 In a meeting with Iranian President Hassan Rouhani on the sidelines of the 70th annual session of the United Nations General Assembly in New York on Sunday, Italian Prime Minister Matteo Renzi voiced his country’s enthusiasm to enter Iran’s market immediately.

He further expressed Italy’s willingness to promote cooperation with Iran as part of its foreign policy agenda and focus on the Middle East issues.

For his part, the Iranian president said Tehran-Rome cooperation will contribute to the settlement of tensions in the Middle East.

Rouhani warned that the Middle East conflicts will undoubtedly spill into the Mediterranean region if remains unresolved.

On economic cooperation with Italy in the post-sanctions era, President Rouhani said Iran wants the Italian companies to transfer technology rather than making investment alone.

Since Iran and the Group 5+1 (Russia, China, the US, Britain, France and Germany) finalized the text of a lasting deal on Tehran’s nuclear program in July, Europeans have been vying to get the most out of economic opportunities in Iran following termination of the sanctions.