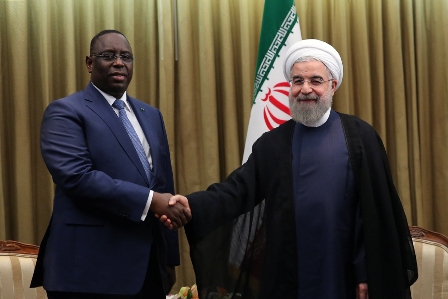 ‘Iran and Senegal have plenty of capacities to develop their ties which can be used for the interests of their nations,’ he said in a meeting on Monday with his Senegalese counterpart Macky Sall in New York.

He said Iran has achieved advances in science and modern technology which can be shared with the friendly and brotherly country of Senegal.

President Rouhani referred to the menace of terrorism and its destructive effects in Middle East and Africa and said, ‘We must all become a single voice and unanimous against terrorism.’

Rouhani also said the government of Saudi Arabia is responsible for the death of hundreds of Hajj pilgrims in Mina on Thursday and shall provide guarnatees that similar incidents will not be repeated in future.

President Sall said Dakar is interested for revival of its ties with Tehran and called for promotion of bilateral relations.

The two presidents exchanged views on the developments in the Middle East and Africa.