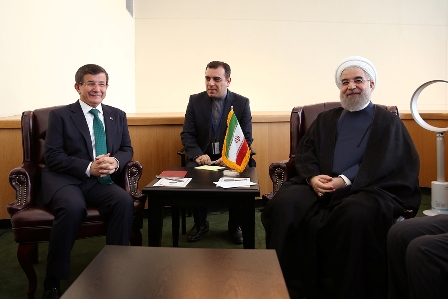 Iran, Turkey ties to develop in interests of peoples: Rouhani

New York, Sept 28, IRNA – President Hassan Rouhani said Iran will not forget its friends in hardships and after removal of the sanctions, it will give the priority to those countries that did not leave the Iranian nation alone.

In a meeting on Monday with Turkish Prime Minister Ahmet Davutoglu in New York, he said, ‘Iran and Turkey share views in many global issues and their relations must further develop.’

Referring to the crimes committed by terrorists against Muslims in Iraq and Syria, he added, ‘Bilateral cooperation and consultations shall expand so that with a sound understanding of the realities, we can contribute to the settlement of existing problems afflicting the nations in the region.’

‘The governments of Iran and Turkey demand return of tranquility to the region, wiping out of terrorists, preventing disintegration of neighboring countries in the region, restoring security, and return of refugees to their homelands,’ said President Rouhani.

The Turkish prime minister said, whatever the outcome of elections in his country, relations with Iran will remain the top priority for the government in Ankara.

Welcoming the nuclear agreement between Iran and P5+1 group of world powers, he said, ‘We hope it will open a new horizon for the economic relations of the both countries and the target of 30 billion dollar bilateral trade will be achieved.’

He added that friendly ties between Iran and Turkey can serve as an example to be followed by other countries and neighbors and that both countries are orchestrated in the fight against terrorist groups.

Rouhani and Davutoglu also exchanged views on regional issues including Yemen, Syria and Iraq, on the necessity of the joint fight against terrorists, and on ways of establishing peace and tranquility in these countries.