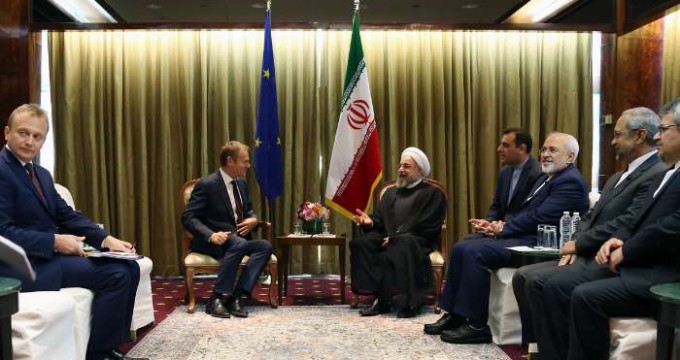 ‘We should plan for creating a considerable development in all-out relations between Iran and European Union based on mutual interests in the new atmosphere created the nuclear agreement post-era,’ President Rouhani said during the meeting with Tusk while reiterating that the sanctions imposed against Iran were wrong right from the beginning.

‘The EU member-states suffered the most during the sanctions era and in the new era we should renovate and expand Iran-EU relations to compensate for the past,’ the Iranian president added.

President Rouhani said that swift and precise implementation of the nuclear agreement or Joint Comprehensive Plan of Action (JCPOA) plays an important role in the expansion of ties, and said, ‘The executive attempts and preparing the grounds for removal of the sanctions needs serious movement by all sided, specially the European Union.’

He pointed to the impact of the nuclear agreement on Iran-EU cooperation on the one hand and the cooperation and coordination of both sides to resolve the regional problems, and said, ‘We have always had good and traditional relations with the EU, specially with a number of the EU member-states; these relations should be revived.

The European Council president, for his part, underlined the need for the expansion of cooperation between Iran and the EU, and said, ‘Lifting the sanctions is tantamount to choosing cooperation instead of confrontation and also protecting the interests instead of tension.

Tusk said that the nuclear agreement is an important success for Iran, Europe and the world, and added, ‘The European Union did its best to make the negotiating bear result and this agreement is the first step for the broadening of cooperation.’