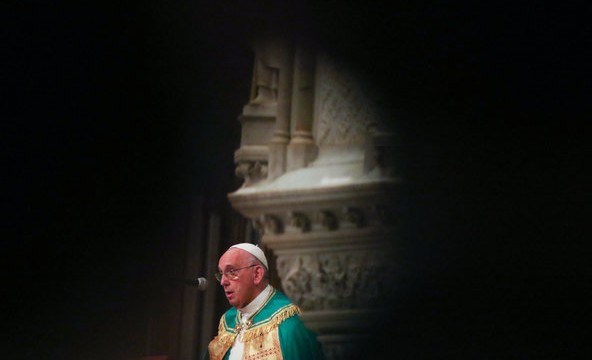 NEW YORK (AFP) – Pope Francis on Thursday (Sept 24) used his first public remarks since arriving in New York to express solidarity with Muslims after a devastating stampede in Saudi Arabia.

“I want to express the closeness of the church in the face of the tragedy people suffered in Mecca,” said the pontiff at the start of his homily during prayers at St Patrick’s Cathedral. “In this moment of prayer, I unite and join in prayer with our almighty God and merciful father,” he added.

The stampede killed at least 717 people and injured hundreds more at the haj, one of the worst-ever tragedies at the annual Muslim pilgrimage.

Pope Francis arrived in New York on the second leg of his six-day US tour, and was greeted by cheering crowds of thousands who lined Fifth Avenue to catch a glimpse of him in his popemobile.

Thursday marked the Muslim feast of Eid al-Adha in America, where more than 1,800 public schools in New York closed for the first time in honour of a Muslim religious holiday.

Pope Francis received a rapturous welcome to New York, where adoring crowds cheered the head of the Catholic church gliding down Fifth Avenue in his popemobile before being counselled against greed at evening prayers.

The head of the world’s 1.2 billion Catholics, who has made poverty a focus of his ministry, was driven past some of the most opulent boutiques in New York en route to a recently refurbished St Patrick’s Cathedral.

There he led evening prayers for dignitaries and members of the clergy, expressing solidarity with Muslims after the stampede at Mecca, paying tribute to women, to the huge delight of Americans, and cautioning worshippers against the excesses of wealth.

“We can get caught up measuring the value of our apostolic works by the standards of efficiency, good management and outward success which govern the business world,” he said.

“Closeness to the poor, the refugee, the immigrant, the sick, the exploited, the elderly living alone, prisoners and all God’s other poor, will teach us a different way of resting, one which is more Christian and generous,” he said.

Outside the cathedral, which recently underwent a US$177 million (S$252 million) renovation, people lined the streets under draconian security to catch a glimpse of a religious leader admired by more than 70 per cent of New Yorkers.

“I am very happy,” said Dolores Prebo, a young mother from Ecuador who lives in Queens and who snagged her spot at 1 am with her 20-month-old son.

Even Donald Trump, the billionaire Republican leading the race for president who said the pope was wrong on climate change and who wants to deport illegal immigrants, was spotted on a balcony surveying the scene.

On Friday, the pope will address the UN General Assembly, lead an inter-faith service at the 9/11 Memorial and visit a Catholic school in Harlem.

Later, he will parade past 80,000 cheering faithful in Central Park before celebrating mass at Madison Square Garden for 20,000 guests.

He wraps up his six-day trip on Saturday and Sunday in Philadelphia at an international festival of Catholic families.

In the US capital on Thursday, Pope Francis became the first pope to address a joint meeting of the US Senate and the House of Representatives, where he was greeted by applause and a standing ovation.

He used the speech to urge American lawmakers, riven by bitter disunity, to do more to help the poor, suffering migrants around the world, fight climate change and abolish capital punishment.

The pope spoke in heavily accented English and was frequently interrupted by applause from his American hosts as he touched on social, financial and humanitarian issues.

He addressed the biggest refugee crisis since World War II, the relentless flow into Europe of Africans, Afghans and Syrians fleeing war and poverty.

PLIGHT OF THE POOR

And he spoke of the plight of poor Central Americans who make dangerous, often deadly treks across the Mexican border into the United States, into places like California and Arizona.

“We must not be taken aback by their numbers, but rather view them as persons, seeing their faces and listening to their stories, trying to respond as best we can to their situation,” he said.

The Republican-controlled Congress has failed to approve a sweeping reform that would have helped give legal status to an estimated 11 million undocumented migrants, mostly Latinos, living in the States.

On climate change, Pope Francis said the United States had “an important role to play. Now is the time for courageous actions and strategies.”

A major global climate conference is scheduled for December in Paris. The goal – after previous gatherings saw polluters like the US, Brazil and China fail to reach agreement – is to strike a deal to cut greenhouse gas emissions blamed for global warming.

The pope also called for a worldwide end to the death penalty – the US is one of the few countries that still practice it – and denounced the arms trade.

From Capitol Hill, he headed to a lunch with the homeless, where he was treated to a friendly mobbing, with lucky invitees scrambling around for a handshake or a cell phone picture.