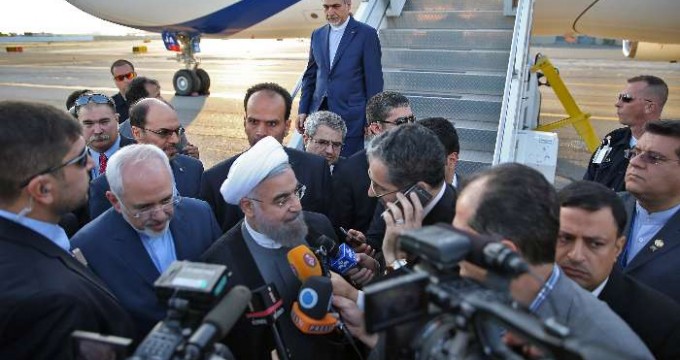 ‘Today after the nuclear agreement there are conditions that we should pursue expansion and constructive interaction with the world and concurrent with the international and regional issues we should pursue achieving sustainable peace and stability,’ President Rouhani told reporters upon his arrival in New York’s John F. Kennedy International Airport on Thursday.

The Iranian president commented on the objectives of his visit to New York to attend the 70th meeting of the UN General Assembly, and said, ‘I will pursue the same objectives of the previous visits during this visit and by studying the most important international and regional issues, I will powerfully follow up the issues related to retrieving the rights and national interests of the Iranian nation.’

‘Regional issues, including developments in Yemen, Syria and Iraq, are among the issues that I hope I could reach constructive and useful decisions with the world leaders to remove insecurity and restoration of sustainable security and stability in the region,’ President Rouhani added.

While in New York, the president will address the UN General Assembly as well as the United Nations Sustainable Development Summit 2015 , meet and confer with the UN Chief, a group of world leaders, a number of Iranian elite living in the US and economic activists.