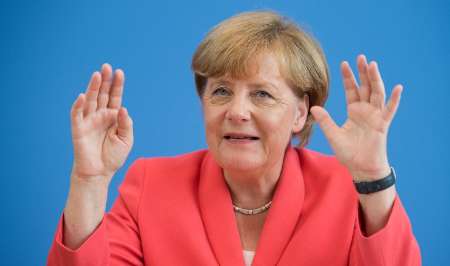 German Chancellor Angela Merkel says the Iranian government as well as the government of Syrian President Bashar al-Assad must be part of any negotiations aimed at putting an end to the crisis in Syria.

“We have to speak with many actors; this includes Assad, but others as well. Not only with the United States of America, Russia, but with important regional partners, Iran, and Sunni countries such as Saudi Arabia,” Merkel told a Thursday press conference in Brussels following a summit of European Union (EU) leaders on the recent refugee crisis facing Europe.

Western countries, which all along the way have been insisting on Assad’s departure, seem to be modifying their positions vis-à-vis the crisis in Syria.

On Saturday, US Secretary of State John Kerry said although Assad must relinquish power, the timing of his removal should be decided through negotiations.

A Syrian refugee hugs one of his twin babies on Eftalou beach, on the Greek island of Lesbos, after crossing the Aegean Sea from Turkey, September 21, 2015. (Photo by AFP)

The EU leaders released a statement after the Brussels meeting, urging a new push for Syria’s peace talks.

“As regards Syria, we call for a renewed UN-led international effort to bring an end to the war that has caused so much suffering and forced an estimated 12 million people to leave their homes,” the statement read.

Syria has been gripped by deadly violence since March 2011, with reports putting its fatality figure at more than 240,000.