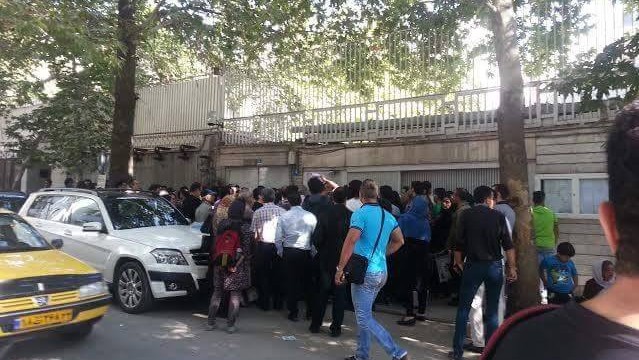 Iranians facing difficulties to get Visa to Europe

The Iran Project, Tiziana Ciavardini – Since the election of the President Hassan Rouhani and after the ‘Iran deal’ has been perceived, many Iranians desire to visit European countries. In the last few years Visas requests have increased and triplicated, and the Embassies and Consulates of European Countries which hold the Schengen Visa are facing the problem to make easier the procedure to get Visas.

Schengen visa is the document issued by the appropriate authorities to the interested party for visiting/travelling to and within the Schengen Area. The Schengen Area is comprised of 26 countries that have agreed to allow free movement of their citizens within this area as a single country. Of the 26 countries bound by the Schengen agreement, 22 are part of the EU and the other 4 are part of the EFTA. The citizens of the non-Schengen member countries like IRAN are requested a mandatory Schengen Visa in order to enter the Schengen Zone. Schengen area covers the majority of European countries, except for the United Kingdom and countries such as Romania, Bulgaria, Croatia, Cyprus and Ireland soon to be part of the agreement. However, there are countries that are not part of the EU like Norway, Iceland, Switzerland and Lichtenstein yet do belong in the Schengen area. This type of visa obtained allows the passenger to travel only in the Schengen State that has issued the Visa or in some other cases, in certain Schengen States specifically mentioned when applying for the Visa. Apart from these Schengen countries, this specific Visa is not valid to any other Schengen country not specified previously.

In the last few months most of the European Consulates in Tehran have received many protests and allegations for the difficulties to get an appointment in order to submit the Visa request. An inquiry done at the Italian Embassy in Tehran showed its determination to solve the problem as soon as possible. The procedures are more or less the same for all Consulates in order to get Visa; the traveler has to call the related Consulate and get the appointment, but most of the times telephone lines are busy due to the huge request of Visas. The access to telephone lines and e-mail accounts of all the Consulates, and the time of queuing to get an appointment, seems to be a very difficult problem to solve for all the European Consulates. In fact this method for most of them is very complicated. One or two persons to answer the telephone are not enough to solve the situation. The appointments (slot) could also be taken online over the internet website.

However, many websites of European Consulates have been hacked, affecting the possibility to get appointments online. The latter, is the best and fastest way to get an appointment if hackers would not block all the pages. Another way to get Visas is to have a partner in the European countries that can send an invitation to the Consulate. Despite of this easy procedure, the visa applicant shall still submit his documentation to the Consulate. The Italian Consulate for example, increased its personnel just to make the Visa procedures work properly; nevertheless the requests are so many that at the moment is not possible to make the procedure faster. After appointment has been secured, the people in charge at the Consulate must examine all the supporting documents on a case by case basis, and grant or refuse the Visa if the documentations are not complete.

Lately, many people went early in the morning in front of some European Consulates in Tehran, in order to be the first in the row to submit their documentation. Unfortunately, even going very early doesn’t mean that they can submit their documentation on that day, since the lists of appointments is already fixed, and the only thing they can do is ask for an appointment at a later date. One of the ways to get Visas is going through a travel agency that provides the Visa with an organized Travel tour (ticket + hotel). Indeed, to make the Visa procedure faster the Consulate provides to travel agencies some slot (appointment) in the number of about 40 each day. Sometimes the agency might not sell all the travel packages so they use the slots provided by the Consulate just to sell the slot itself for a price of about 100 to 300 euros, sometimes even more! This procedure is illegal since the agency received the slot from the Consulate just to sell the Visa with the tour package. Almost in every newspaper in Iran it’s possible to find some agencies who offer appointments by payment. It is important to remind that the VISA from the Consulate is issued without any extra payment. Some people hazard the hypothesis that the hackers, who do not permit the online request to get the appointment for Visa, are related to the agencies but we do not have any proof of that.

Let’s say that the Visa situation is very complicated and is going to detriment of many Iranian citizens (mostly the youth) who like to go to Europe. All the Embassies regret the situation and are constantly working to find solutions to oppose hackers activity. Consulates are developing new systems in order to make easier the approach to get Visa. European countries like France, Italy and Germany approximately give 25.000 – 30.000 visas each year and the feeling is that after removing the sanctions and the end of Iran isolation there will be an increase of cultural and business relationships and many people will be willing to make a trip to European countries.