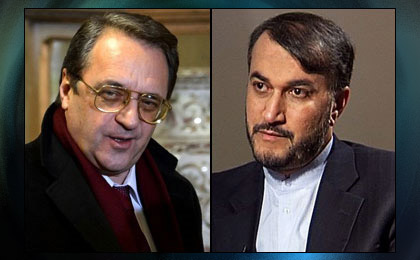 Iran and Russia have called for further efforts to end regional crises, particularly the conflict in Syria, through diplomatic means and solutions based on combating terrorism.

In a Monday meeting in the Russian capital, Moscow, Iran’s Deputy Foreign Minister for Arab and African Affairs Hossein Amir-Abdollahian and his Russian counterpart Mikhail Bogdanov discussed the latest developments in the Middle East, especially the crisis in Syria.

Referring to the rapid and serious developments in the Middle East region, Amir-Abdollahian said, “Consultations between Iran and Russia have always been beneficial,” urging more bilateral negotiations.

“Meetings and negotiations between the two countries’ officials at various levels have provided a great opportunity for the promotion of cooperation as well as efforts for more regional convergence,” Amir-Abdollahian said.

He also highlighted the necessity of continued efforts by Tehran and Moscow to settle the Syrian crisis and counter Takfiri terrorism in the Arab country.

The file photo shows foreign-backed terrorists in the Syrian province of Homs.

The Russian diplomat, for his part, described bilateral consultations on the regional conflicts as fruitful, saying, “We consider these talks and their continuation invaluable and demand more concentration on them.”

During negotiations between Iran and Russia, many solutions for the peaceful resolution of regional crises have been achieved, Bogdanov said.

Syria has been grappling with foreign-backed militancy since 2011. The conflict has reportedly claimed the lives of over 250,000 and displaced some 11 million.