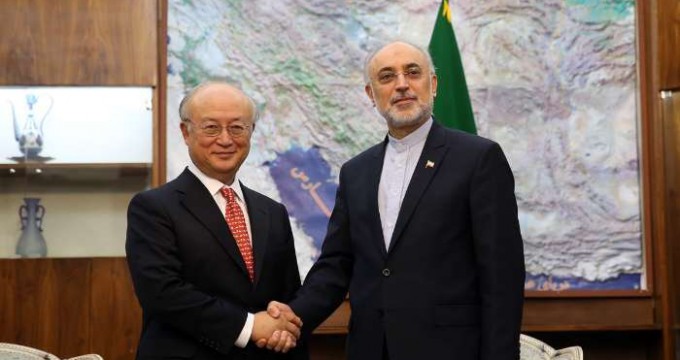 TEHRAN, Iran (AP) — The chief of the U.N. nuclear agency has acknowledged that it agreed to have Iranian experts take samples it wants to analyze for signs that Tehran might have worked on atomic arms. But it says that the probe meets strict agency standards.

Such sampling is usually done by experts of the U.N.’s International Atomic Energy Agency. But IAEA chief Yukiya Amano says that Iranians carried out that part of the probe at Parchin, where the agency suspects that explosive triggers for nuclear weapons might have been tested.

The transfer appeared to be part of a confidential draft agreement with the agency that allows Iran to gather its own samples. It wasn’t immediately clear if IAEA experts were present during the sampling.

However, Amano said Monday that the procedure meets strict agency criteria. He says the IAEA confirms “the integrity of the sampling process and the authenticity of the samples.”

Iran said Monday it has given samples to the U.N. nuclear agency collected by its own experts at the Parchin military site, where Western nations suspect it once worked on detonators for nuclear weapons.

The transfer came a day after Yukiya Amano, the head of the International Atomic Energy Agency, was taken on a ceremonial tour of the military site, and appeared to be part of a confidential draft agreement with the agency that allows Iran to gather its own samples.

Amano was paying a one-day visit to Iran as part of an assessment due in December that will feed into the larger July nuclear deal between Tehran and six world powers, helping to determine whether sanctions will be lifted.

“Last week, several environment samples… taken by Iranian experts without the presence of the agency’s inspectors, were given to the U.N. nuclear inspectors.” Iran’s atomic energy agency spokesman Behrouz Kamalvandi was quoted as saying by the official IRNA news agency.

Kamalvandi said the move was part of an agreement between Iran and the agency, without elaborating.

Iran denies it has ever sought nuclear weapons, and insists Parchin is a conventional military site. Tehran has refused to allow inspections of its military sites as part of the nuclear deal, fearing foreign espionage. However, Iran allowed IAEA inspectors to visit Parchin twice in 2005.

Under a confidential agreement seen by The Associated Press, Iranian experts monitored by video and photo cameras would gather samples from Parchin and then turn them over to the IAEA for laboratory analysis.

Under the July agreement, Iran would curb its nuclear activities and submit to new inspections in return for billions of dollars in sanctions relief.

A special Iranian parliamentary committee is reviewing the deal to prepare a report for lawmakers. Late Sunday, a member of the committee, Alaeddin Boroujerdi, said he expected parliament would approve the deal.

“I think that the deal will pass through the parliament within the next week,” Boroujerdi was quoted as saying by Al-Alam, Iran’s state-run Arabic language TV channel.

Iran’s supreme leader, Ayatollah Ali Khamenei, who has the final say on all major policies, has said it’s up to lawmakers to approve or reject the deal.