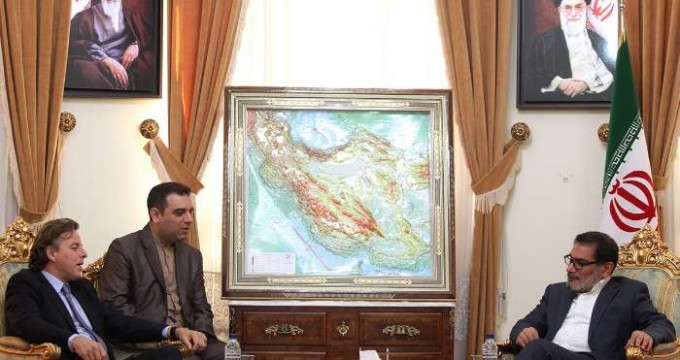 TEHRAN (FNA)- Secretary of Iran’s Supreme National Security Council (SNSC) Ali Shamkhani in a meeting with Dutch Foreign Minister Bert Koenders warned that any attempt to revive sanctions against Iran would further exacerbate the mistrust between Tehran and the world powers.

During the meeting in Tehran on Monday morning, Shamkhani referred to the nuclear agreement between Tehran and the Group 5+1 (the US, Russia, China, Britain and France plus Germany), and said, “Sustainability of the political solution depends on the two sides’ commitment to their undertakings.”

“Any efforts to return or maintain the sanctions are against the Joint Comprehensive Plan of Action (JCPOA) and will further increase mistrust,” he added.

Shamkhani said under such conditions that the global community is integrated, those governments which impose unilateral sanctions against other states merely deprive their nations of the profits of economic cooperation, and warned that returning to the past conditions would be much difficult, given the fact that capacities have been replaced.

Koenders, for his part, stressed Tehran’s important position in regional equations, and said his country is ready to enhance the level of relations with Iran in all fields.

Shamkhani’s remarks came after Ayatollah Khamenei’s September 3 comments on the US officials’ claims on the suspension of sanctions, where he stressed that Tehran had always underlined the necessity for the termination and not suspension of embargoes.

“If the sanctions are not due to be removed, then there will be no deal either. Hence, there needs to be a decision to be taken in this regard,” he added.

He said Iran had made some concessions during the negotiations with the world powers in order to see a removal of the sanctions in return, otherwise Tehran wouldn’t have attended the negotiations and Iran could have increased its 19,000 centrifuges to 60,000 centrifuges, continue 20% uranium enrichment and accelerate its research and development activities.

“If the sanctions are due to be suspended, our actions should also be arranged in the form of suspension and not essential measures on the ground,” Ayatollah Khamenei said.

A week later, the UNSC unanimously endorsed a draft resolution turning into international law the JCPOA reached between Iran and the 5+1 group of countries over the Islamic Republic’s nuclear program.