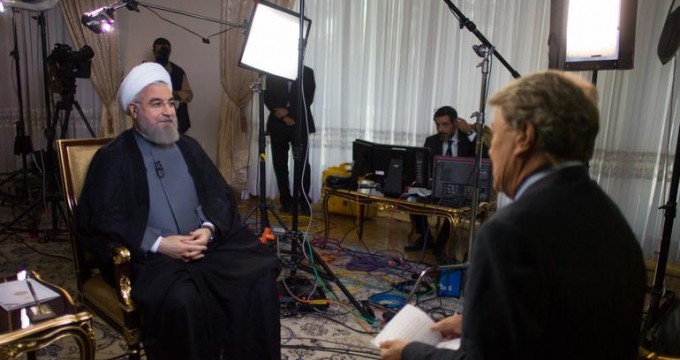 Iranian President Hassan Rouhani said in an interview with a U.S. television network that aired on Sunday that Tehran and Washington “have taken the first steps” toward decreasing their enmity due to a landmark nuclear accord.

But Rouhani told CBS’ “60 Minutes” program that despite the nuclear agreement, “the distance, the disagreements, the lack of trust, will not go away soon.”

The United States and Iran have been at odds since Iran’s 1979 Islamic revolution. Deep differences remain over Middle East conflicts, as well as what Washington sees as Iran’s support for terrorism and poor human rights record.

The nuclear accord reached in July between Iran and six world powers eases crippling sanctions on Iran in return for limits on its nuclear work.

The accord’s opponents in the U.S. Congress were unable to muster the votes to block it by last week’s legislative deadline for action.

Rouhani, who was interviewed in Tehran, expressed confidence that Iran’s parliament and Supreme National Security Council would likewise approve the accord.

“The majority of our people, in opinion polls, have a positive view of the agreement,” he said. “Institutions like the parliament and the Supreme National Security Council, are usually not far removed from public opinion and move in that direction.”

The powerful Islamic Revolutionary Guard Corps, some of whose members have publicly criticized the deal, “will respect this agreement” once Iran approves it, Rouhani predicted.

The Iranian president, expected to travel to the United States next week for the U.N. General Assembly, suggested he would not oppose some sort of U.S.-Iran prisoner swap.

Iran is holding several Americans, including Washington Post reporter Jason Rezaian, who has dual U.S. and Iranian citizenship. Iranian officials have said they want freedom for Iranians held in the United States, some of whom have been jailed on charges of circumventing U.S. sanctions on Tehran.

Asked if he would support a prisoner exchange, Rouhani told CBS: “I don’t particularly like the word exchange, but from a humanitarian perspective, if we can take a step, we must do it. The American side must take its own steps.”

In the Syrian conflict, Iran has backed President Bashar al-Assad, and Rouhani said Assad should stay in power at least until Islamic State militants are defeated. “How can we fight the terrorists without the government staying?” he asked.

The weekly chant of “Death to America” in Iran “is not a slogan against the American people,” Rouhani added.

“The policies of the United States have been against the national interests of Iranian people,” he said. “We cannot forget the past, but at the same time our gaze must be toward the future.”