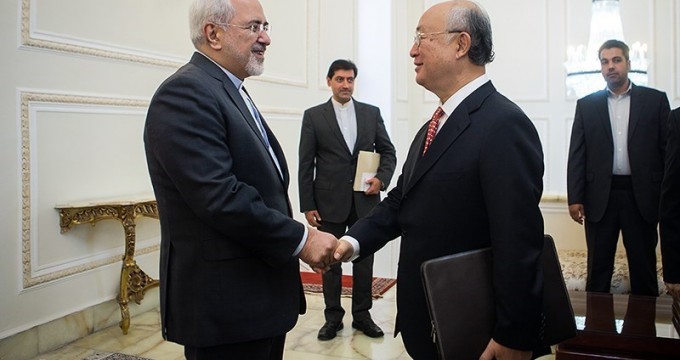 Iran Daily: IAEA head in Tehran for talks on implementation of nuclear deal

The head of the International Atomic Energy Agency, Yukiya Amano, arrived in Tehran on Sunday for talks with senior officials on the implementation of the July 14 nuclear deal between Iran and the 5+1 Powers.

During the one-day visit, Amano will meet President Rouhani, Foreign Minister Mohammad Javad Zarif, and the head of the Atomic Energy Organization of Iran, Ali Akbar Salehi. He will also answer questions from members of Parliament who are reviewing the agreement.

Under the plan with the 5+1 Powers (US, Britain, Germany, France, Russia, and China), the IAEA is to verify Iranian compliance with the terms of the deal. At that point — “Implementation Day” — the US and European Union will begin lifting or suspending sanctions that have crippled Iran’s economy.

The IAEA is projecting Implementation Day to be around December 15.

Last week, a high-level IAEA team was in Tehran to discuss Iran’s response to questions from the Agency about the status of uranium stocks, enrichment, and nuclear facilities. Tehran’s formal submission is expected about October 15.

Speaking with reporters on Saturday, the Supreme Leader’s top aide, Ali Akbar Velayati, was cautious about the confirmation of the deal by Iranian officials: “I should say that the nuclear negotiations have not ended yet since the legal authorities should still make a decision about it, and it is still soon to make any comments before the legal authorities declare their decision.”

Velayati noted the ongoing review by Parliament: “This will continue until we come up with definite results and we hope that the Islamic Republic of Iran’s interests and expediencies will be met in this trend.”

The Parliamentary commission which is holding hearings has said that it will submit its report by early October.