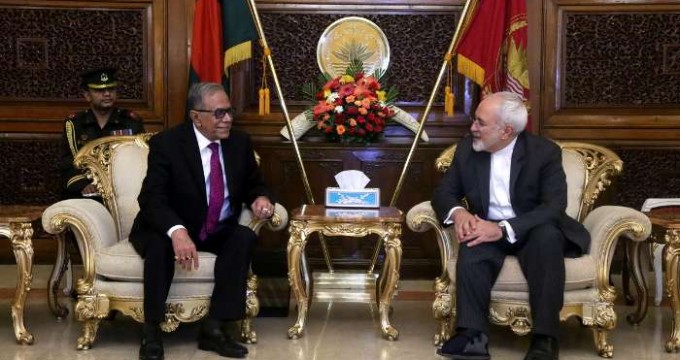 Tehran, Sept 17, IRNA – Foreign Minister Mohammad-Javad Zarif and Bangladeshi President Abdul Hamid on Wednesday announced that ongoing regional crises have no military solution and dialogue and diplomacy are the solution.

The two sides emphasized their respective countries’ will for growing political and economic cooperation, underlining importance of constant political consultations.
They also emphasized growing mutual parliamentary cooperation and exchange of parliamentary delegatons.
The Bangladeshi president congratulated Iran on the nuclear accord with the G5+1.
Meanwhile, in a meeting with Bangladeshi Prime Minister Sheikh Hasina on Wednesday, Zarif said Iran is ready for expansion of ties with Bangladesh and elimination of commercial barriers to expansion of two-way ties.
He said energy sector of Iran can be a reliable partner to Bangladesh.
He underlined that what has brought about division in Yemen, Syria and Iraq is not sectarianism but political intentions.
Ms. Hassina in turn said her country is willing to expand ties with Iran in various domains, including cultural and economic fields.
Zarif also told his Bangladeshi counterpart Abul Hassan Mahmood Ali that after lifting of illegal and tyrannical sanctions against Iran, there will be good grounds for expansion of mutual relations.
He said lift of visa issuance will help expand mutual ties.
The two sides also discussed mutual cooperation in international forums, including the Organization of Islamic Cooperation and the Non-Aligned Movement.
Zarif also highlighted importance of holding joint commission session, which was welcomed by Bangladeshi Foreign Minister.