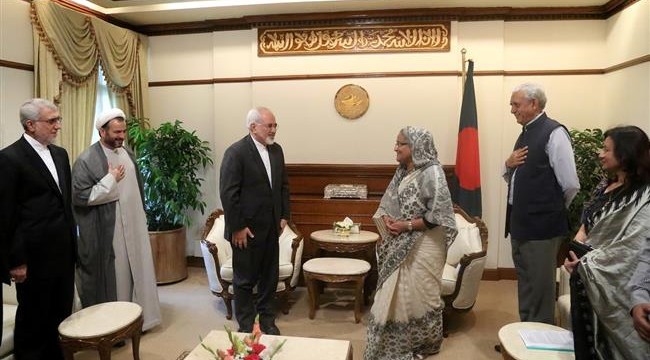 He made the comments in a Wednesday visit to Bangladesh, where he met with a number of top officials, including President Abdul Hamid, Premier Sheikh Hasina and Foreign Minister Abul Hassan Mahmud Ali.

“What has created divisions in Yemen, Syria and Iraq is not sectarianism, but political motives,” Zarif said in his meeting with the Bangladeshi prime minister.
Iraq and Syria have been engaged in battles with the Daesh (ISIL) terrorist group, which has committed gross human rights violations in the areas under its control in the two Arab countries. Saudi Arabia has also been launching airstrikes against Yemen over the past several months in a bid to undermine the Houthi Ansarullah movement and restore power to the fugitive former Yemeni President Abd Rabbuh Mansur Hadi, a staunch ally of Riyadh.

In Bangladesh, Zarif also hailed the friendly relationship between Sunni and Shia Muslims in the South Asian country as an ideal example.

The top Iranian diplomat further expressed the Islamic Republic’s readiness to enhance relations with Bangladesh in all areas and called for the removal of obstacles in the way of mutual trade.

Elsewhere in his remarks, Zarif described the Iranian energy sector as a “trustworthy partner” for the Southeast Asian country.

Sheikh Hasina, for her part, welcomed the development of mutual relations between Iran and Bangladesh in various fields, including economic and cultural areas.

Meanwhile, in a meeting with his Bangladeshi counterpart, Zarif said a visa waiver program between the two countries could contribute to the promotion of Tehran-Dhaka ties.

Zarif also sat down with the Bangladeshi president. During the meeting, the two sides ruled out military solutions to the crises in the Middle East, saying regional conflicts will be settled through dialog and political approaches.