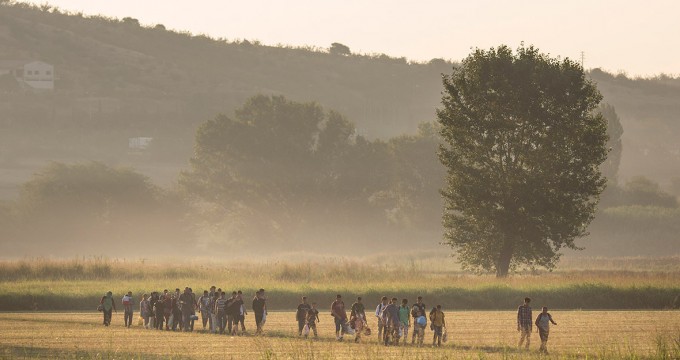 Nearly 4,000 refugees, mostly from crisis-hit Syria, have entered Croatia from Serbia in the past 24 hours following a move by Hungary to close its borders to them.

On Thursday, huge numbers of asylum seekers were continuing to arrive in Croatia, which has become their new path on the long journey to Western Europe, Croatia’s state-run HRT television channel reported.

Some 800 refugees on board a train from the village of Tovarnik, near Croatia’s border with Serbia, reportedly arrived in the town of Dugo Selo, near the capital, Zagreb, early on Thursday.

‘Ready for arrivals,’ but not too many of them

Croatian officials transferred the asylum seekers to a center in nearby Jezevo.

Late on Wednesday, Croatian Foreign Minister Vesna Pusic had said his country was ready for the arrivals, but could not cope with high numbers.

“We are ready to [provide] asylum to a few thousand people and we can handle that, but we are not ready for tens of thousands,” Pusic told HRT, adding, “We do not have capacities” for such an influx.

Croatian Prime Minister Zoran Milanovic is scheduled to hold talks on the refugee crisis in Zagreb with Austria’s Chancellor Werner Faymann later on Thursday. Then, Milanovic would pay a visit to Ljubljana to meet with his Slovenian counterpart Miro Cerar.

Hungary sealed its border with Serbia, using a razor-wire fence on Tuesday and made it illegal to enter the country or damage the fence.

On Wednesday, Hungarian police used tear gas and water cannon to disperse the protesting refugees that sought to enter the country from Serbia.

Budapest also plans to extend its border fence toward Romania in a bid to prevent the flow of refugees seeking to enter the country from there.

The decision has angered Romania, with State Secretary George Ciamba saying in a statement that the Hungarian government has failed to inform Bucharest of the plan, calling it “out of step with the spirit of Europe.”

In recent months, Europe has been facing a huge influx of refugees, mainly coming from war-ravaged countries like Syria, Iraq, and Afghanistan. Most of the refugees land in Italy or Greece, and then head for the wealthier countries of northern Europe by transiting through countries in Eastern Europe and the Balkans, like Macedonia, Serbia, and Hungary.