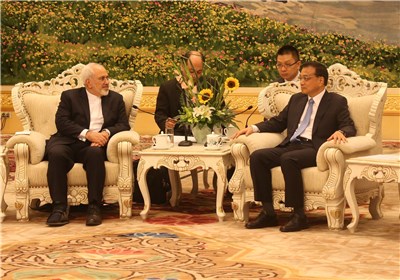 “Iran has always regarded China as a strategic partner, and bilateral relations will undoubtedly improve following the Joint Comprehensive Plan of Action (JCPOA),” Zarif said, referring to a nuclear document finalized between Tehran and world powers, including China, in Vienna on July 14.

He said Beijing has played a positive role in the nuclear negotiations between Iran and the Group 5+1 (the five permanent UN Security Council members plus Germany).

The Chinese premier, for his part, said the Vienna nuclear agreement would help resolve ongoing problems in the Middle East and across the world.

He further expressed hope that all the sides involved in the nuclear negotiations would respect their commitments under the JCPOA.

As regard bilateral ties between Tehran and Beijing, Keqiang said the two sides can bolster their relations in various fields after the implementation of the nuclear deal.

Earlier and in a joint press conference with Chinese Foreign Minister Wang Yi in Beijing, Zarif had strongly deplored the “unconstructive approaches” adopted by certain groups in the US and their possible plots to undermine the nuclear deal.

“Unfortunately, a group in the United States and a group in the region, the Zionist regime (of Israel) in particular, find their interests in conflict and tension,” said Zarif.

The 159-page deal has its own opponents and proponents both in Iran and the other countries that are parties to the Joint Comprehensive Plan of Action particularly the US.