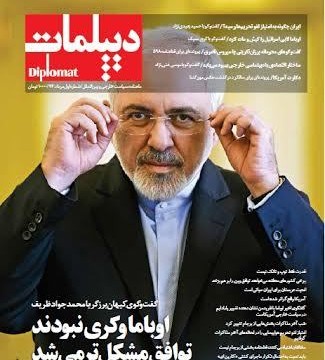 Email: info@thediplomat.ir
The first issue of Diplomat Monthly has been published with Kayhan Barzegar, the Director of the Center for Middle East Strategic Studies and Chair of the Department of Political Science and International Relations at the Islamic Azad University’s Science and Research Branch, as Editor in Chief.
A Note by Editor in Chief
The general tendency toward more profound understanding of issues related to foreign policy and international relations is on the rise in the Iranian society.

The reason is mostly related to direct impact of foreign policy issues on the Iranian daily life. Important issues such as the nuclear negotiations with great powers, especially the United States and the West, breakout of regional crises in Afghanistan, Iraq, Syria, and Yemen, spread and growth of extremism and terrorism in region such as ISIS and al-Qaeda, and all their effects on Iran’s national interests and security on the one hand, and the necessity of economic exchanges and interactions with the world for attracting foreign investments, development of tourism, issues related to security of energy and foreign exchange revenues and their impacts on the national economy and daily conditions of people in the country on the other, have increased this tendency.
At the same time, significance of issues related to Iran is increasing both at regional and international levels, and among nations and states. Owing to its long history, culture, and civilization, high economic potentials, vast energy resources, a powerful middle and intellectual class which itself helps to seek regional stability and battle further growth of extremism, in addition to having a consistent strategy for fulfilling its national goals, have all added to the value of cooperating with Iran.

From this perspective, one may say that the next decade will be Iran’s decade during which diplomacy will play a prominent role in strengthening the pillars of the country’s national power, promoting the status of Iranians at both regional and international levels.

The effort made by President Hassan Rouhani’s administration to bolster interaction with the world and promote a dynamic and accommodative foreign policy to guarantee the country’s security, growth and development, is also a factor that increase Iran’s significance. The Diplomat Monthly aims to boost the general understanding of the Iranian foreign policy issues.
Content of the Magazine
By focusing on foreign policy issues, the Diplomat Monthly is trying to meet demands related to this tendency and even in some way help its development in order to boost public understanding of the Iranian foreign policy issues.
The first interview of Iran’s Foreign Minister Mohammad Javad Zarif following the nuclear agreement in Vienna has been published in this issue. In his exclusive interview with the magazine, Zarif noted that if it were not for the U.S. Secretary of State John Kerry and U.S. President Barack Obama, achieving the nuclear deal would have been more difficult. Meanwhile, he mentioned that if the tenure of former U.S. Secretary of State Hillary Clinton had been extended for four more years, Iran would have faced different conditions throughout the nuclear negotiations.
In-depth and exclusive interviews with Abbas Araghchi and Hamid Baeidinejad, senior members of Iran’s nuclear negotiating team, have been also published in another part of this monthly magazine. Abbas Araghchi told the magazine that “if it were not for the past mistakes in terms of tactic and speech, we would have suffered less cost in the nuclear field.” He, however, emphasized that it was not the Islamic Establishment’s decision to become a nuclear power at a high cost. Hamid Baeidinejad, for his part, has talked about the process of the removal of sanctions in the course of the nuclear negotiations.
In addition to the exclusive interviews with senior members of the nuclear negotiating team, the first issue of Diplomat Monthly has also focused on other cases such as the regional outcomes of the Joint Comprehensive Plan of Action, Turkey’s new policy, the outlook for convergence in Europe, and the shift in China’s policy toward militarism.
A special case marking the anniversary of the acceptance of the Security Council Resolution 598 by Iran has been published in another part of this specialized foreign and international policy monthly. In this part, Hossein Alaei, a former Revolutionary Guard commander, has discussed mutual services of war and diplomacy, while Sirous Nasseri, a former diplomat, has unveiled his secret negotiations with Barzan Ibrahim al-Tikriti, a half-brother of Saddam Hussein.
The first issue of Diplomat Monthly also includes a case on the anniversary of the passing away of Hans Morgenthau. In this section, Tehran University professors such as Ghasem Eftekhari, Hossein Seifzadeh, and Ebrahim Mottaghi expressed their views on the lessons learned from the political realism in Iran.
The first issue of the Monthly also contains analytical interviews and articles by a great number of renowned experts and figures in the fields of international, diplomatic, and economic relations of the country.