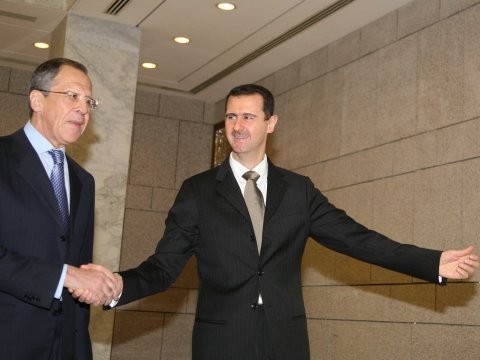 Alwaght- It has always been known that Russia supports Syria in its battle against the wave of extremism that has swept the country off its once steady ground. It has been evident that Moscow’s foreign policy was adapted to fit the criteria which would necessitate any kind of political support to the Syrian government that has been the basis of Russian-Syrian relations for almost five years now.

When the whole world, except a few countries including Iran and China, stood against Syria, it was Russia who vetoed a bid at the UN to impose sanctions against its ally. When the so-called world powers were mulling military action against Damascus, it was Russia who stood its ground against it.

Though time and time again Russia has shown its support to Syria, a new chapter in the Russian-Syrian relations has unfolded.

On Wednesday, Reuters released an exclusive investigation sourcing anonymous US officials who said Russia had sent two tank landing ships and additional cargo aircraft to Syria a day earlier, in addition to deploying a small number of naval infantry forces.

The news agency also spoke to Lebanese sources who confirmed that Russian forces have begun taking part in military operations in Syria.

Russia has backed its move with the argument that NATO-airstrikes are not enough to defeat the militant groups that have occupied large parts of the country.

This has had Washington fumbling for a reason to stop Russia’s military aid it is providing for the Syrian army as it continues to fight against foreign-backed terrorists almost five years after the so-called revolution unmasked itself to reveal its true identity.

US President Barack Obama has raised the warning finger against Russia over its recent buildup of military equipment and personnel in Syria.

“The strategy they’re pursuing right now of doubling down on Assad is a mistake,” Obama said.

Washington’s reaction is by no means a surprise considering the persistent efforts it has exerted alongside the Israeli regime and Saudi Arabia to topple the resilient Syrian government.  This may as well be another attempt to prevent the Syrian army from fortifying the country against the ongoing aggression.

As opposed to such a stance, Russia’s support only implies that Moscow is even ready to engage in military confrontation to defend Syria regardless how high it may cost. Shipping high-tech weaponry and military forces to the port city of Latakia, for example, can be seen as nothing less than drawing a red line that should not be crossed.

In another contrast, Russia’s escalating support for Syria which in turn is largely boosting cooperation with Iran and Hezbollah against Takfiri terrorists, Syria’s arch-enemies are amplifying support for their puppets.

Despite increasing international pressure, the Kremlin is showing no signs of backing down on its decision to prop up assistance to the Syrian government.

Russia’s Foreign Minister Sergei Lavrov made several remarks concerning this issue but most recently affirmed that military assistance will not be brought to a close.

“There were military supplies, they are ongoing and they will continue. They are inevitably accompanied by Russian specialists, who help to adjust the equipment, to train Syrian personnel how to use these weaponries,” Lavrov said.

Battling extremism across various parts of the country, the Syrian government is in a desperate need for military support, to repel terrorist groups from the country and defend civilians. However, military option is not the goal to be sought; rather as Assad has repeatedly pleaded, political solution is the only way out of the near five-year crisis.