Pursuit of China’s oil prize hots up as Iran returns

In the race to supply crude to the world’s biggest energy user, it’s the tussle for second place that’s too close to call.

Russia, Angola and Iran are vying to be runner-up to Saudi Arabia as the top seller to China. The contest is set to intensify as Iran seeks to recover market share lost because of sanctions and the US Congress debates a nuclear deal that will allow the Persian Gulf state to boost shipments.

China overtook the US as the biggest importer of crude most recently in June, taking advantage of a 50 per cent slump in benchmark prices over the past year to boost strategic reserves. With the Asian nation forecast to account for more than a quarter of global demand growth in 2016, the prize of becoming a top supplier will bolster the economic health of national producers that depend on energy exports for most of their budget revenue.

“Whether you’re number 2 or number 3, the numbers are very close,” said Victor Shum, a vice-president at consultant IHS. “In a globally oversupplied market, there is more competition for the growing Chinese pie.”

Iran, the second-biggest producer in the Organization of Petroleum Exporting Countries before its nuclear programme prompted the European Union to ban purchases of its crude in 2012, will boost production “at any cost” to reclaim market share, Oil Minister Bijan Namdar Zanganeh last month said China is the Islamic Republic’s biggest customer, and Zanganeh has signalled it’ll target Asia for sales. Iran currently lags behind its rivals in shipments to China.

US President Barack Obama has locked up enough Senate votes to preserve the deal between Iran and world powers even if both chambers of Congress support a resolution against the agreement. The pact eases economic sanctions in exchange for curbs on the country’s nuclear programme.

“What Iran has been waiting for is on the verge of becoming a reality,” said Hong Sung Ki, a Seoul-based senior analyst at Samsung Futures. “Its oil supplies are likely to be boosted from next year and China among other Asian nations will absorb the largest amount.”

The plunge in crude prices amid a global glut has undermined Russia’s rouble, underscoring the vulnerability of the world’s biggest energy exporter to slumping oil, which together with natural gas accounts for about half of budget revenue. The nation still has an advantage when competing with other suppliers.

A direct pipeline to northern China has boosted exports of East Siberia-Pacific Ocean crude. Seaborne shipments were also spurred by the proximity of the Kozmino port in Russia’s east to China. 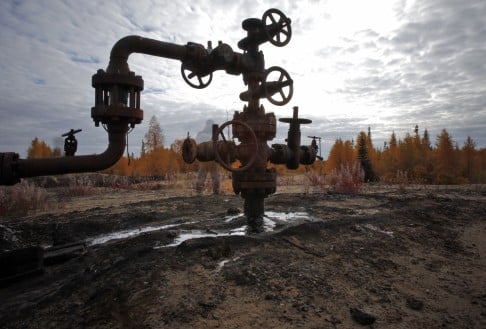 Brent crude, the benchmark for more than half the world’s oil, has tumbled 52 per cent over the past 12 months. Photo: AP

“Russia is Angola’s main competitor,” said Tushar Tarun Bansal, a senior oil analyst at industry consultant FGE. “Russia, through both seaborne supplies and the ESPO pipeline, can take the number 2 or 3 position.”

Angola, whose government gets about 70 per cent of revenue from oil, needs to curb spending and find other ways to boost economic growth to cope with the crude-price shock, the governor of its central bank, Jose Pedro de Morais, said recently.

“Oil from Angola has to travel through the Cape of Good Hope in Africa,” Umang Parikh, an analyst at BMI Research, a London-based unit of Fitch, said: “Iranian oil travels a much shorter distance so it has the transportation advantage.”

Still, the dominance of Saudi Arabia in the Chinese market may prove an advantage for Africa’s second-largest crude producer, according to FGE’s Tushar. Crude from Angola has a lower sulphur content than Middle East supplies, and refineries that run one variety will also need to process the other to balance the quality of feedstock, he said.

Brent crude, the benchmark for more than half the world’s oil, has tumbled 52 per cent over the past 12 months. Futures in London were little changed at US$46.36 a barrel yesterday.

Saudi Arabia, the world’s biggest crude exporter, which shaped Opec’s strategy to keep pumping even as prices tumbled, isn’t unassailable in its position as China’s leading supplier. Russia edged past Opec’s biggest producer in May, the only month this year when it gave up the top spot.

Exports rebounded in June from a five-month low as the Saudis boosted output to a record. Demand is growing, particularly in China and Asia, Saudi Arabian Oil Minister Ali al-Naimi said in June. The country is ready to provide China with all its crude needs, the state-run Saudi Press Agency cited him as saying in April.

“Every producer is keen to fight for market share and maximise revenues in order to mitigate the impact of lower prices,” said Virendra Chauhan, a Singapore-based analyst at industry consultant Energy Aspects. “It’s unarguably a buyers’ market at the moment.”